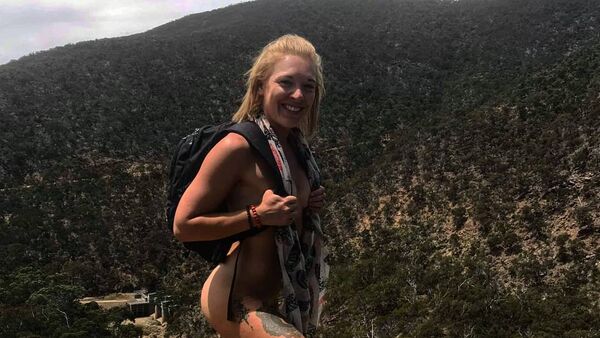 © Photo : rachybaby5683 @Instagram
Subscribe
Rachael Fitzpatrick announced a “Yes Year” after she parted with her boyfriend, whom she had planned to marry. The list of challenges included outings in the wild in nothing but her birthday suit every weekend, sharing the highlights on Instagram.

Rachael Fitzpatrick has gained a 20,000-strong following on Instagram, revealing slightly more than her standard blogging material. Along with photos with friends and pets, snaps from sports competitions and training sessions, she occasionally flashes her body in all its glory with beautiful Australian landscapes in the background. The Australian made naked hiking her thing a couple of years ago.

The woman told the German tabloid Bild that she has been hiking since she was a kid, but slightly changed her habits after a breakup with her boyfriend, whom she previously wanted to marry.

In 2016 she announced a “Yes Year”, taking part in the “Spartan Race” obstacle course, where a group of women persuaded her to stroll naked.

"I was really scared, but it was my Yes Year, so I had to. It was so liberating!" she said.

The love for naked hiking began in 2017, when she went on a hiking holiday with her friend Mark.

“Mark was some way ahead of me. Then when I eventually caught up with him I found that he had taken all of his clothes off. ‘Come on’, he said, ‘what are you waiting for?’ And so I took mine off too – and found that I loved it”, she told the British newspaper Metro.

According to her, there are a few challenges that she needs to deal with; for instance, putting lotion on thoroughly to protect from the sun; or the danger of snakes and spiders – but these dangers do not spoil the pleasure much.

“It’s the feeling of total liberation that I love. The feeling of being completely free and close to nature – it’s just awesome. Going out into the big wide world and baring yourself totally can be a little daunting at first, but once you’ve gotten over that initial fear it is so rewarding”, she told the outlet.

Fitzpatrick revealed that naked hiking had helped her “to become more comfortable in my own skin and about who I am – and I know that I’m a much stronger person for it”. She is also eager to share her passion for body positivity with others as an activist of the campaign Get Naked Australia, which promotes nude strolls.