Maduro Seeks to Boost Colombian Border to Prevent US ‘Provocations’ 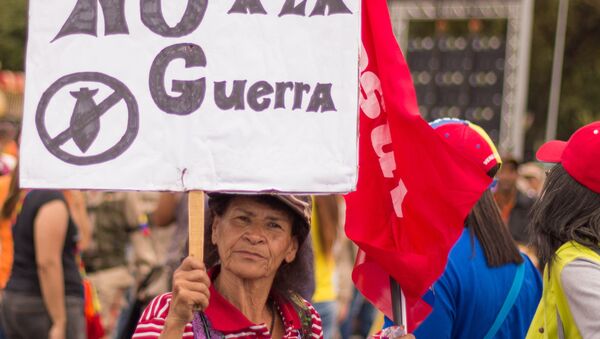 © Sputnik / Carlos Hererra
/
Go to the photo bank
Subscribe
The embattled Venezuelan leader, who is being challenged by self –proclaimed interim president Juan Guaido, backed by the US, earlier suggested adopting a plan for permanent mobilisation of the country’s Armed Forces to guarantee “security and peace” in the face of an alleged military intervention by Colombia and the US.

Venezuelan President Nicolas Maduro has ordered his country’s armed forces to prepare a plan to permanently deploy troops, guaranteeing the nation’s impenetrability, citing the threat of “provocations” by Colombia and the US.

"Reinforcing the border with Colombia is necessary to make it “safe and peaceful… We must be well deployed to defend our land, to thwart any provocation, which we anticipate and which we do not know yet. Imagine them defending their maritime area against our marine and air force”, Maduro said.

He insisted that Colombian President Ivan Duque, backed by the US, is conspiring against Venezuela.

"I am not exaggerating. In the White House, Donald Trump and Ivan Duque announced plans for war against Venezuela”, the country’s president said referring to the latest meeting between the two leaders in Washington. This echoes his earlier claims that if "the US intends to invade us [Venezuela], they will have a Vietnam worse than they can imagine”.

Maduro made the statement about mobilisation immediately after the largest ever military drills, Angostura.

"It is a plan to maintain the mobilisation of the Bolivarian Armed Forces for protecting our country, which is one of the constitutional obligations … Mobilisation and training. Training and deployment. There must be tanks, missiles of the republic and the soldiers of the republic; [ways] to combine air defenses, naval forces, deployment of the military in order to carry out exercises", the Venezuelan leader said as broadcast by his Periscope channel.

The tensions on the Venezuelan-Columbian border are flaring up as 23 February approaches, when US “humanitarian aid”, now stockpiled in Columbia, is expected to reach Venezuela. The date was set by self-proclaimed interim president Juan Guaido despite strong opposition from Maduro. He blasted it as a ploy to topple the government, instead demanding that Washington lift the economic sanctions imposed on Caracas.

“It's a booby trap, they're putting on a show with rotten and contaminated food… They've stolen $30 billion and are offering four crumbs of rotten food”, he said.

The International Committee of the Red Cross (ICRC) has warned US officials against politicising humanitarian assistance and delivering aid without the consent of local authorities. UN spokesman Stephen Dujarric told reporters last week, referring to the crisis in Venezuela, that humanitarian action must be independent of political or military objectives.

Incidentally, the Venezuelan opposition leader also gave pro-Maduro military personnel time to choose their "the side of the Constitution" by 23 February.

US National security adviser John Bolton, at the same time, repeated his claims that Venezuela’s top military commanders are talking to Maduro’s rivals. He told Fox News that the key generals, the leading figures, supporting Maduro, are in constant conversation with the opposition, although it is not on the surface. According to Fox News, citing its sources, the prospect of a unilateral military intervention remains high.

On Friday State Department deputy spokesperson Robert Palladino revealed that officials from the State Department and US Agency for International Development (USAID) will be aboard a military aircraft that the United States is sending to the Venezuelan border on Saturday to deliver aid to Venezuela.

In July 2018 the Associated Press news agency reported, citing an unnamed representative of the US administration that in August 2017, Trump, during a meeting in the Oval Office, asked his aides about the possibility of a military intervention in the country.

In particular, Trump reportedly pointed to what he considered past cases of "successful gunboat diplomacy" in the region, such as the invasions of Panama and Grenada in the 1980s, AP reported, citing a US official.