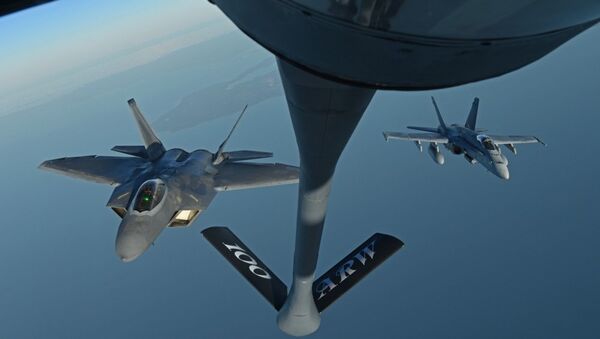 The Pentagon has rolled out its “stealth” aircraft, tasked with breaching enemy anti-air defenses on day one of a potential war.

The US military recently conducted drills in the Pacific Ocean, rolling out "stealth" aircraft including the discontinued F-22s, the troubled F-35s and even the B-2 Spirit strategic bombers built near the end of the Cold War, Business Insider reported Friday.

The drills were conducted with the assistance of the USS Wasp, a cross between an aircraft carrier and an amphibious assault vessel.

Interestingly, the F-35s participated with their weapons stored externally. This method increases the jet's payload, as compared to internal storage, but also significantly increases plane's radar visibility. According to the plane's maker, Lockheed Martin, the external payload model switches the airplane into "beast mode," which is expected to be utilized on day three of a war, after enemy anti-air defenses have been suppressed.

​The F-22 Raptors, however, reportedly trained for day one operations, which might indicate the F-35's stealth capabilities have turned out to be not so perfect as hoped.

​The B-2s are capable of carrying gravity nuclear bombs, as well as "massive ordnance penetrators," or GBU-57s, believed to be the largest non-nuclear bomb in the US arsenal (they are actually almost 1.5 times heavier than the infamous "Mother of All Bombs," the GBU-43/B).

The F-22s and the B-2s are viewed as "door kickers," aircraft tasked with breaching enemy defences on the first day of a war, paving the way for the less stealthy fighters, Insider writes.

A B-2 Spirit deployed from Whiteman Air Force Base, Mo., conducts aerial refueling near Joint Base Pearl Harbor-Hickam, Hawaii, during an interoperability training mission Jan. 15, 2019. pic.twitter.com/LYvii9qlKZ

​The B-2s spent their time near Hawaii "going out to an airspace and practicing realistic threats," with an F-22 on either wing, Lt. Col. Robert Schoeneberg, commander of the 393rd Bomb Squadron at Whiteman Air Force Base in Missouri, told the website. The Pacific area of responsibility "is of high importance as of late," he said, adding that "it will continue to be of high importance."

The military drills come at a time of heightened tensions between the US and China over the South China Sea, with the Chinese military reportedly deploying nuclear-capable bombers and anti-air missile defenses and radars in the region and openly threatening to sink US aircraft carriers with its "carrier killer" long-range cruise missiles.

US Military Mulls Base Deployment Near South China Sea - Adm Davidson
​Recently, China has come up with a technological solution intended to nullify US airplanes' low visibility advantage by deploying a networked system of radars, capable of creating composite radar pictures from signals received by many stations at the same time, Insider reports.

"China is fielding networked air-defense systems that can coordinate the radar pictures from multiple sites in an area like the South China Sea," Bryan Clark, a senior fellow at the Center for Strategic and Budgetary Assessments who was formerly a special assistant to the chief of US naval operations, told the website.

"This could enable the radars to see F-35Bs or other low-observable aircraft from the side or back aspect, where they have higher radar signatures, and share that information with [surface-to-air missile] launchers elsewhere in the region to engage the F-35Bs," he added.

The dispute over the South China Sea sparked after Beijing claimed most of the waters for itself; Chinese claims are contested by several regional countries, and the US has since repeatedly interfered in the dispute, saying it's conducting "freedom of navigation" operations in the waters.