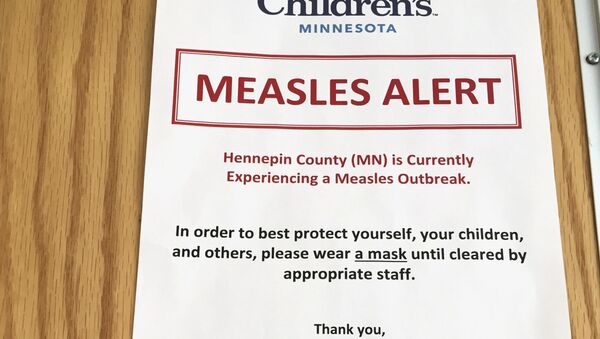 Several researchers told Radio Free Europe that the Russians are at it again: this time social media trolls and bots, who were accused of meddling in the 2016 US presidential election, are being blamed for a measles outbreak in Europe.

“We actually don’t know enough about the influence of misinformation online upon vaccination intentions and behaviours. What we do know is that there is an element of echo chambers in this”, said WHO vaccine specialist Katrine Habersaat.

Their efforts may have contributed to the measles outbreak that infected thousands in Europe last year, the researchers claim, adding that the same Twitter trolls had attempted to influence the outcome of the 2016 presidential election in the US – an accusation, which, however, didn’t find proof to this day.

The remarks by the scientists echoed the conclusion made in a 2018 reported by the American Public Health Association, entitled “Weaponized Health Communication: Twitter Bots and Russian Trolls Amplify the Vaccine Debate”.

The fact that even a measles outbreak is being linked to “Russian trolls” has caused quite a stir on social media, with netizens openly ridiculing the “Russians Did It” narrative:

Wait, you’re blaming anti-vaccine activism on Russian trolls? Back in 2014?

#russophobia at its best (or worse) + BigPharma agitprop: two birds with a stone. pic.twitter.com/TLfigPH5Ir

Oh come on. Anti-vaxxers in the US and UK, sometimes including major celebrities, have been stoking fear about vaccines for decades. You can't just blame everything on Russian trolls. https://t.co/ke65FuM96N

Anti-vaccine propaganda appeared in Russia from the West. Do not throw with a sore head to a healthy one. Conspiracy about vaccines is present in the American series "The X-Files", you say, it was also Russian trolls make?

Many noticed a certain pattern: when something goes wrong in the West, let’s blame Russia:

When something is out from standard thinking russian’s troll come out! People don’t vaccine because could be dangerous and no one dispels doubts with indipendent analyses and correct informations! Fuck!

Oh dear lord.. Not every bad thing in the world is because of Russia.. People are just dumb.. it's that simple..

This is getting ridiculous… are they even serious? We don’t need the Russians to raise idiots. Political manipulation has sense, health no. But i guess it’s a trend. When something goes wrong in the west, let’s blame Russia…

One Twitterian pointed out that the accusations in the RFE article range from unproven election interference, to promoting anti-vaccination views, with no evidence to corroborate the claims:

Your two paragraphs jump from unproven election interference to anti-vaccination, suggesting a link while providing no evidence for it. You have failed to prove anything in this obvious BS propaganda stunt.

Anyone that believes this is STUPID & should go read a book. pic.twitter.com/rDwPLH1vre

Another netizen turned to sarcasm, citing other horrific things that Russia could possibly be implicated in:

The Russians caused The Flood and left the dinosaurs out.

In the meantime, after over two years of investigation in Russia’s alleged meddling, the Senate Intelligence Committee said that it had found no direct evidence of collusion between the Trump campaign and the Kremlin.

"If we write a report based upon the facts that we have, then we don't have anything that would suggest there was collusion by the Trump campaign and Russia", said Sen. Richard Burr, R-N.C., the chairman of the Senate Intelligence Committee, in an interview with CBS News last week.

Everything That Happens, Russia Gets the Blame

Speaking to Sputnik, Dr Flora Kyriacou, a paediatrician from Cyprus, acknowledged that it is true that measles is spreading around the world, but also that it is unrealistic that the Russians are responsible for this.

"The anti-vaccine idea began in the UK. It is ridiculous to blame the Russians for that, but in one way everything that happens, Russia gets the blame.  In my opinion, social media has an important role [in the] global health crisis due to the way they [are] manipulating and presenting the facts", Dr Flora Kyriacou told Sputnik in a written interview.

She further explained that the anti-vaccination idea began with one UK doctor, who said that "vaccination causes autism and social media spread that information without any evidence, and by that the UK and EU citizens stop vaccinating their children".

Dr Kyriacou also noted that in some countries, one can speak of epidemic, but "we can NOT talk about pandemic".

"Social media caused this by spreading false information", she added.

Outbreak: Measles Public Emergency Declared in US Anti-Vaccine ‘Hotspot’
In order to increase the level of vaccination, paediatricians need to accurately inform their clients about vaccinations, Dr Kyriacou emphasized. "In general, the medical society must inform correctly the people through social media", she said.

Echoing her words, Anca Paduraru, the European Commission spokesperson for Health, Food Safety and Energy Union projects, in a written interview with Sputnik, said that vaccinations are the responsibility of EU member states.

"We need to keep a watchful eye and work together to raise awareness on the importance of vaccination and possible consequences of failing to vaccinate", Anca Paduraru told Sputnik.

"Vaccine hesitancy is without doubt one of the key challenges […]. Vaccine hesitancy is complex and context specific, varying across geographies and vaccine types. It is influenced by behavioural and social factors such as complacency, convenience and confidence. The waning of public confidence in vaccines worldwide is a cause for increasing concern and a major challenge for public health experts", she said.