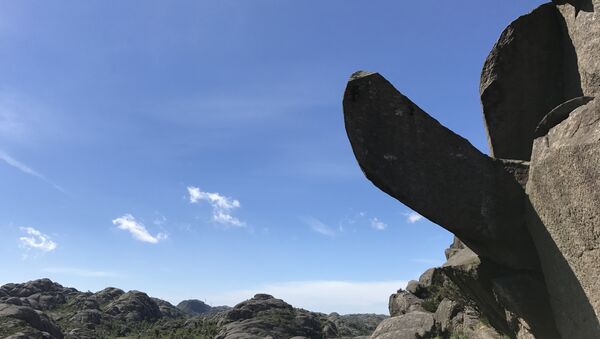 Trollpikken or "Troll's Penis" is a scenic rock formation in Rogaland County, Norway frequented by tourists for its trademark phallic shape.

To attract more travellers to the country, the tourist portal Visit Norway and the government foundation Innovation Norway have listed six tips for exciting locations to have sex in. The list's main selling point is Trollpikken or "Troll's Penis", a picturesque rock formation groomed to surpass the selfie magnet of Trolltunga ("Troll's Tongue").

The "to love" list includes sex under the northern lights, in small cabins, at Kråkenes lighthouse or in a steaming sauna. Trollpikken, though, is touted as the hottest option for the extremely adventurous.

"We've created the article to attract new social media followers, that's what we are hoping for. Norway is a well-known brand for nature, but at the same time is known to be a bit boring, perhaps. We try to be a little playful, humorous maybe a bit cheeky", Katrine Mosfjeld of Innovation Norway told the news outlet Kampanje, assuring that Norway is not striving to become a new sex tourism destination.

The innovators have admittedly tried their best to reach a younger, sportier public. The way Mosfjeld jokingly put it, "if our Facebook page was a person, it would be a lady over 60". By her own admission sex may be used to spice things up.

😍 We have picked out 6 romantic places to have good sex in Norway. https://t.co/6uWMNK52VT #visitnorway #Valentinstag #ValentinesDay2019 pic.twitter.com/qRS4chkl2R

​"I realise we're operating on state money, but sometimes we have to go for cheap solutions, too", Mosfjeld laughed. She called sex "the oldest trick in the book". "Make it a little tabloidy, and hope for the best results", she added.

Kjetil Bentsen, who heads the foundation Dalane Kyststi, which, among other things, works to improve the hiking opportunities at and around Trollpikken, does not have any objection to the invitation.

"Well, as long people are in free nature and don't disturb others, I don't see anything wrong with it. As long as they behave", Bentsen told Kampanje. He also admitted that many people probably already had this idea in mind.

It was Bentsen himself who gave the suggestive rock formation its current name and launched it as a tourist attraction and a challenger to Norway's other natural sights, such as Preikestolen, internationally known as the Pulpit Rock.

Heidi Victoria Skeiseid, a postdoctoral fellow in consumer behaviour at Hotel High School at the University of Stavanger, called the recent PR stunt "exciting" and "quite innocent".

As one may have expected, though, there is a catch. According to Norway's criminal code, sex in public places is not allowed and is punishable by fines starting from NOK 8,000 ($925).

"However, I won't necessarily be hiding under a rock to arrest those who followed the tip", local police chief Magnar Sandstøl told naitonal broadcaster NRK.

Trollpicken collapsed in 2017, shortly after gaining international attention, but was happily restored in a nationwide crowdfunding campaign.