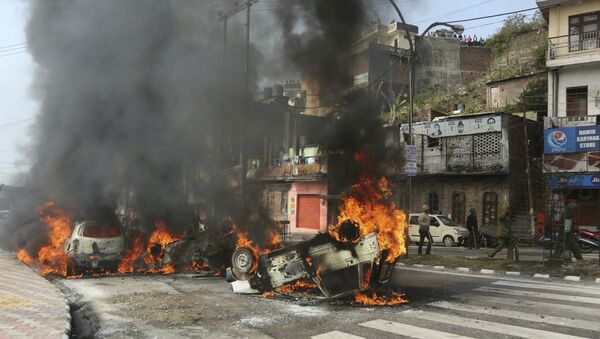 Pakistan-based terror outfit Jaish-e-Mohammed has claimed responsibility for Thursday’s deadly suicide car bombing in Pulwama of Jammu and Kashmir in India, in which at least 45 security personnel were killed and scores of others injured.

As India awaits a strong response to the Pulwama terror attack, a huge number of protestors thronged the Pakistani Embassy in New Delhi, triggering a law and order challenge. Security has been beefed up in the area, as activists of the United Hindu Front and "Swabhiman Desh Ka" gathered outside the embassy shouting slogans of revenge for Thursday's gruesome terror attack.

. @DelhiPolice @DCPNewDelhi detained 30 Youth for burning Pakistani flag at Pakistan Embassy. They are in Mandir Marg Police station from 9 AM, police didn't give them even water from morning. Will you release or want another protest at ur police station? pic.twitter.com/FxFB733f5D

Protestors have demanded that all ties with Pakistan be snapped by shutting down the Pakistani Embassy in New Delhi and calling back Indian diplomats from Islamabad.

Earlier in the day, India's Ministry of External Affairs summoned Pakistan's envoy and served a strong demarche, demanding Islamabad take stern action against the terrorist group Jaish-e-Mohammed, which has taken responsibility for the attack.