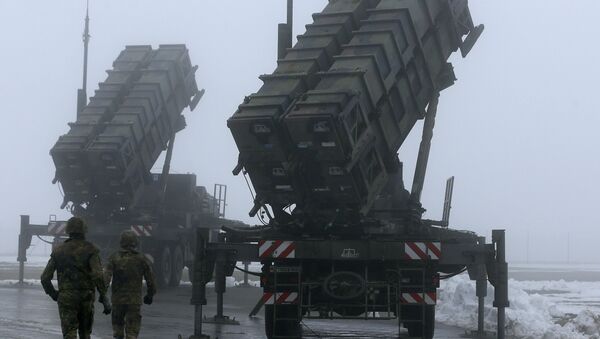 Google’s latest 3D rendered maps of four Taiwanese cities have inadvertently revealed the locations of key missile defense locations on the self-governing island, including a previously-secret Patriot missile base. Now, Taipei is rushing to push the tech giant to blur the maps over those sites.

Taiwan Announces New Phase of Space Program, Hopes for Moon Mission
In 2012, Google Maps announced its intention to stereophotogrammetrically map many of the world's major cities, enabling users to see them in three dimensions and incredible detail. On Wednesday, the updated maps of the cities of Taipei, New Taipei, Taoyuan and Taichung on Taiwan Island, which governs itself independently of Beijing, were released to the public. However, Taipei officials were quick to realize that the pictures were a little too detailed for their comfort.

The tech giant's maps are so good that they revealed previously unknown missile bases and other defense installations across the island. The pictures are so detailed that it's possible to tell what type of missiles and vehicles are being shown, including the previously secret Patriot missile base in Ankeng, Taipei, as well as defense infrastructure at the National Security Bureau and the Military Intelligence Bureau, the South China Morning Post noted.

Taiwan Proposes Ramping Up Biowar Defense Research With New Labs
​Now, the Ministry of National Defense is rushing to get Google to blur the maps over those locations, ministry chief Yen Teh-Fa told the Legislative Yuan, the country's unicameral parliament, on Friday, according to the Central News Agency.

However, Yen reassured the legislature and the public, saying, "The site of defense infrastructure at times of peace does not indicate its location at times of war," CNA reported.

In Taiwan it's illegal under the Fort Act to reveal the locations of certain military structures, although Yen noted that "the confidential parts are all inside the structures, which would be highly difficult to expose through the 3D maps."

Taiwan to talk with Google over exposed missile positionhttps://t.co/mO6SE19bmj pic.twitter.com/XM1DrzNL7Y

​Taipei has previously convinced Apple to blur its maps over other sensitive sites, such as a cutting-edge, US-made radar near the northern city of Hsinchu that can detect missile launches as far away as China's Xinjiang Province, on the far side of the country, SCMP noted.

The primary adversary of Taiwan, formally known as the Republic of China, is Beijing, with which it maintains no formal relations. The two territories represent the two sides of a civil war that largely ended three quarters of a century ago, when communist forces led by Mao Zedong conquered all of mainland China in 1949. The government in Taipei is all that remains of the republic, and both Taipei and Beijing maintain that they are the only legitimate Chinese government. A military standoff has thus ensued, with Washington tacitly backing Taipei, including selling Taiwan weapons, even though it maintains no formal relations with the Taiwanese government.

After the pro-independence Democratic Progressive Party suffered massive electoral defeat last November, Beijing changed its tune somewhat, promoting reconciliation and a reduction of tensions. However, China, the US and Taiwan have all continued to engage in provocative actions in recent months, including sending nuclear bombers on laps around the island, sending large warships through the narrow strait that divides Taiwan from mainland China, and conducting live-fire weapons drills in the South China Sea.