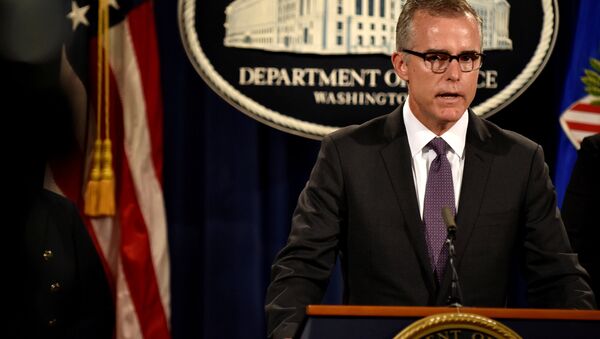 On Thursday, it was revealed by former Acting FBI Director Andrew McCabe that in May 2017, key officials in the US intelligence community weighed the question of removing US President Donald Trump from office after he unexpectedly fired the bureau’s then-director, James Comey.

McCabe, who was fired in March 2018 on the eve of his retirement, made the remarks in an interview with CBS' "60 Minutes" about his memoir, "The Threat: How the FBI Protects America in the Age of Terror and Trump," due to hit shelves next week. The full interview is due to air Sunday, but a clip was shown on "This Morning," another CBS program, Thursday morning.

"It shows an agency out of control," Dan Kovalik, a human rights and labor attorney, told Radio Sputnik's Loud and Clear Thursday, noting that the bureau was "not accountable to the American people."

​"There were meetings at the Justice Department in which it was discussed whether the vice president and a majority of the Cabinet could be brought together to remove the president of the United States under the 25th Amendment," CBS correspondent Scott Pelley, who interviewed McCabe, said Thursday morning. "These were the eight days from Comey's firing to the point that Robert Mueller was appointed special counsel. And the highest levels of American law enforcement were trying to figure out what to do with the president."

"I was very concerned that I was able to put the Russia case on absolutely solid ground, in an indelible fashion," McCabe said in the clip. "That were I removed quickly, or reassigned or fired, that the case could not be closed or vanish in the night without a trace."

The US Constitution's 25th Amendment, adopted in 1967 in the wake of President John F. Kennedy's 1963 assassination, lays out the manner and structure of the succession of power in the event that the president or others in the line of succession become unable to perform their duties, either due to death, illness or some other incapacitation.

Of relevance to the situation McCabe claimed arose in May 2017 is Section 4 of the amendment: "Whenever the Vice President and a majority of either the principal officers of the executive departments, or of such other body as Congress may by law provide, transmit to the President pro tempore of the Senate and the Speaker of the House of Representatives their written declaration that the President is unable to discharge the powers and duties of his office, the Vice President shall immediately assume the powers and duties of the office as Acting President."

Further, McCabe claimed that then-Deputy Attorney General Rod Rosenstein, who was heading the Russiagate investigation after then-Attorney General Jeff Sessions recused himself, floated the idea at one of these meetings that someone might wear a wire during meetings with Trump, the New York Times reported on Thursday.

The paper previously reported in September 2018 on Rosenstein suggesting wearing a wire around Trump, but gave no firm source about the revelation. At that time, Rosenstein issued a statement to the Times unequivocally denying having ever made the suggestion.

The DOJ released a statement later on Thursday disputing McCabe's claim about Rosenstein, saying his recitation of events is "inaccurate and factually incorrect."

A department spokesperson added that Rosenstein "has stated, based on his personal dealings with the president, there is no basis to invoke the 25th Amendment, nor was the deputy attorney general in a position to consider invoking the 25th Amendment."

Last month it was revealed by former agency officials that following Comey's firing, the FBI had also briefly opened a counterintelligence probe into Trump because he was seen as a possible national security concern for the dismissal.

US Vice President Mike Pence also denied any talk of a Trump ouster, telling NBC Thursday, "I've never heard of it… Frankly, I find any suggestion of it to be absurd."

Kovalik, author of the new book "The Plot to Control the World: How the US Spent Billions to Change the Outcome of Elections Around the World," told hosts Brian Becker and John Kiriakou that the episode sounds like an attempted coup d'etat.

"We've been talking about this for a while. In many ways the Russiagate scandal, so to speak, has always appeared to look like a coup attempt by the intelligence agencies against Trump, and now we know that, you know, there was a plan to get him out of office. So it is fascinating, to say the least."

Noting that, despite what one may think of Trump, he was nonetheless elected, Kovalik said, "Here you have the FBI, very shortly — it wasn't long after Trump's inauguration — trying to find a way to get him out of office. I mean, people need to be concerned about this: that you have an intelligence agency that thinks it can decide who is the president of the United States! It's very troubling."

"What really is troubling here is that the FBI should be an agent of our elected officials; they should be governed by our elected officials and held accountable to the American people in that way. Here you have the FBI deciding, again, to try to derail people's campaigns, and then once they're elected, to try to unseat them… this should be of concern to everyone who cares about our constitution, who cares about democracy. Because the truth is: if they would do it to Donald Trump, they would certainly do it to someone that those of us on the left would like more."

Kovalik said it was a "contradiction" to both support a coup against a democratically elected leader and then claim you support democratic values. "There's nothing democratic about it, and people who were involved in such a thing probably could be tried for treason," the attorney said.

Kiriakou recalled when in January 2017, before Trump had even been sworn in, Senate Minority Leader Chuck Schumer (D-NY) warned the president-elect that if "you take on the intelligence community, they have six ways from Sunday at getting back at you," after Trump rejected the US intelligence assessments that led to the Russiagate investigation.

Kovalik lamented that today, people "seem okay with the intelligence services doing these sorts of things and taking on powers that, again, only our elected officials should have. People are now romanticizing people like James Comey — to me it's very scary, because it does mean you probably will not see another Frank Church-type committee," he said, recalling the Democratic senator who headed a 1975 effort to investigate the abuse of powers by several intelligence agencies just years after the death of 50-year-reigning FBI Director J. Edgar Hoover, whose long career included extensive spying on and repression of dissident movements in the US, from communists and labor activists to civil rights leaders. Church's efforts led to the creation of the permanent US Senate Select Committee on Intelligence in 1976, which provides legislative oversight of the intelligence community.

"This thing is going to go on, and again, what it's going to do is it's going to take down people who we believe in and who are challenging the state. That's how these things go," Kovalik said.