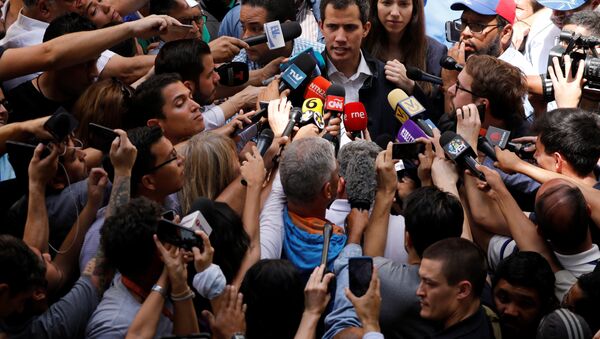 "This amendment to registrant's Registration Statement is to give notice of a new foreign principal, the Bolivarian Republic of Venezuela under President Juan Guaido", the document said.

Attorneys Eli Whitney Debevoise and Arturo Caraballo from international law firm Arnold & Porter Kaye Scholer LLP are listed as registrants in the filing, which is dated 11 February but was publicly posted by an advocacy group on Wednesday.

Debevoise served as the US Executive Director of the World Bank from 2007 to 2010.

Pro-Venezuela Rally in Rome: Activist Says Aid From the US is NOT Humanitarian
Arnold & Porter had been representing Venezuelan President Nicolas Maduro’s government in court related to government debt restructuring matters, the Center for Responsive Politics (CRP), a lobbyist watchdog group, said in a statement on Wednesday. Both lawyers are listed as working at the firm’s Washington, DC office.

The US government recently seized billions of dollars in Venezuelan oil assets to transfer to Guaido, who proclaimed himself the country’s president on 23 January. Venezuelan President Nicolas Maduro has accused the United States of orchestrating a coup while Russia and several other countries continue to support constitutionally elected Maduro as the country’s only legitimate and democratically-elected head of state.

Guaido Says Humanitarian Aid to Enter Venezuela on 23 February
US Presidents Donald Trump and his Colombian counterpart Ivan Duque Marquez said in a joint statement on Wednesday that Washington and Bogota are determined to work together to resolve the ongoing political crisis in Venezuela. However, Trump declined to clarify if the United States will send additional troops to Colombia amid the ongoing crisis in neighboring Venezuela.

Trump said earlier in an interview with the CBS broadcaster that US military intervention in Venezuela was "an option".