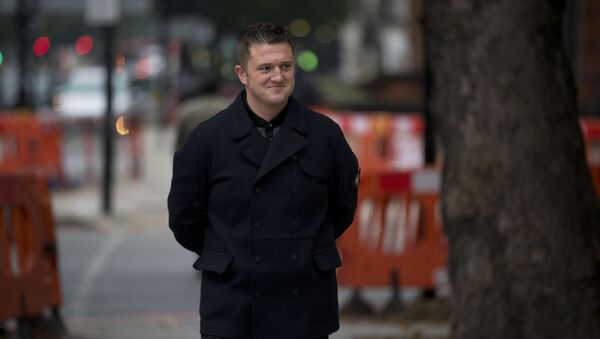 British right-wing activist Tommy Robinson, a vocal critic of Islamisation, has already lashed out at The Sun for spreading the footage without providing proper context.

Tommy Robinson, the co-founder of the right-wing street protest movement English Defence League, has proclaimed himself “king of the whole Islam race” in a newly released video.

In the footage obtained by The Sun, Robinson is heard singing: “I’m going to punch you in the head, kick you in the face, because I am the king of the whole Islam race”.

Robinson also declared himself a Zionist and said that “if there was a war tomorrow, which there will be, because I’ll probably start it at the end of this sesh”, he would fight for Israel.

Tommy Robinson declares himself "king of the Islam race," boasts about scoring drugs, claims to be a Zionist, while warning he'd like to start a war against the Palestinians because "fuck Palestine." pic.twitter.com/9r2oUo374f

“I had to ring Benjamin Netanf**king blah … I can’t remember his name, and got my Zionist card out and said I am a Zionist and I bought us everything. Shalom motherf**ker”, he added.

'Batten Might Be Keeping Seat Warm': Tommy Robinson Could Soon Be UKIP Leader
In another video, Robinson is seen talking to the camera and saying: “No matter where I’ve gone in the world, I score. I will show you tonight. I’ve gone to f**king Qatar, I’ve gone to Doha and scored gear on the sesh while they’re all praying. Everywhere mate, every city I’ve gone to”.

After the videos were unearthed, Robinson took to Facebook to say that the footage was from a group chat with friends of different ethnicities, who were “bantering each other non-stop”.

While admitting that he was “embarrassingly drunk”, the activist, whose real name is Stephen Yaxley-Lennon, accused The Sun of editing clips and taking his words out of context:

“Does anyone believe that I scored gear in Doha? Does anyone think that Tommy Robinson went to an Islamic country and got drugs and took them?”

He also assumed that one of his friends had sold the video to the UK tabloid, and called them an “absolute snake”.

Last May, Robinson was detained on a contempt of court charge for livestreaming outside a courthouse, where a gang rape trial was being held. The

Tommy Robinson Faces Legal Action for Saying Bullied Syrian Boy Attacked a Girl
EDL’s  former leader was already on a suspended sentence for contempt of court for recording a video in Canterbury Crown Court in May 2017 during the trial of four suspected rapists, which made the judge activate a three-month sentence for the previous offence and add 10 months for the new one.

The activist, in turn, slammed PayPal’s move as “fascism” and suggested that it was an attempt to silence him and stop him from working, and reporting stories that “media don’t want to cover”.

Also in November, Robinson was named as UKIP leader Gerard Batten’s adviser on grooming gangs and prison reform in a move that was met with condemnation since the party forbids current or former members of proscribed organisations, including the EDL, from obtaining membership.