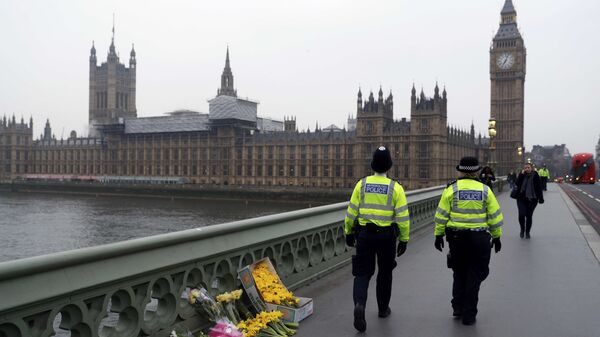 Following the agreement of both houses on the text of the bill, the new UK Counter-Terrorism and Border Security Act received Royal Assent on 12 February, and is now an Act of Parliament.

The new legislation gives the police greater powers to investigate hostile state activity. The act was introduced as a bill to the House of Commons on 6 June 2018 and was introduced to the House of Lords on 12 September 2018. A provision amending the Reinsurance (Acts of Terrorism) Act 1993 came into force on 12 February.

Sputnik: The law now specifies counter-action not only against terrorists but hostile states. Particularly, Russia was singled out by [Home Secretary] Sajid Javid. Why do you think this rhetoric is being maintained against Moscow?

David Lowe: Yes, that is a difficult one because it is about producing hard evidence to show that there was that direct link that's alleged from the UK government to the Russian government.

Stop Chasing Twitter Transphobes & Focus on Knife Crime - BoJo to UK Police
And I don't think that has been forthcoming yet, that you need to prove beyond reasonable doubt. But Mr Javid was saying this evening when he was introducing the bill. Last year he made reference to the Novichok incident in Salisbury.

But I think there has been over the years, if I can put it mildly, a frosty relationship between the UK and Russia, which I think is a shame because if we look at the wider picture, I mean we are talking about terrorism, we are looking at how Russia has been a victim of Islamist terrorism certainly around the Caucasus Region and was also having to deal with groups like Daesh* in Syria, in Iraq, and of course, they have been a threat to the UK as well as other Western states.

So, maybe, you know, there has always been an opportunity to work together on this but it is a shame that this rhetoric is still being used until there is hard evidence. But I mean there was that investigation that they did say there was a link but, you know, we need hard evidence.

But, you know, I am not a politician, I am not a diplomat but hopefully, these relationships can get a bit closer in the future.

Sputnik: What can you say about the state of cooperation between the UK and Russia on terrorism? Is there any cooperation actively going on right now?

David Lowe: Well, on the surfact there doesn't seem to be any and as I have said you know I gave that example they are dealing with Daesh. Maybe behind the scenes, there might be some discussion on cooperation at some level somewhere but that's me just making an educated guess on that. But there are opportunities there and perhaps, sometimes it is worth biting the bullet and starting to talk again.

Sputnik: Can you comment on the greater powers that the police have been endowed with under this law? Is there any concern that these powers could be abused?

UK Counter-Terror Police Head Blames US for Giving Daesh 'Propaganda Victory'
David Lowe: Well, I think in some certain circumstances greater powers are needed because, as technology evolves, we need legislation to keep up to date and give authorities, like the State Security and the Counter-Terrorism policing, the ability to act.

And of course, the key in any area of countering terrorism is to prevent acts from happening. We don't want to see the fact that they are going to have to detect an act of terrorism because that means people have either died or been seriously injured.

So you do need these wider powers and I do know from my own experience as an expert witness working with some of the agencies. You are looking at how the terrorists are using communications, how they are using the Internet. We have to keep up the pace and give them [authorities] wider access power.

David Lowe: Yes, I mean this is on Section 3 of this act. It is amending Section 58 of the Terrorism Act 2000. There has always been a degree of controversy over Section 58. Well, you know, what is information that is likely to be useful for terrorists?

You know, are you looking at maps and train timetables, etc. Perhaps, putting it all together. I think I understand people's concerns because it is saying if people view these once, then they can commit the offence.

But I think common sense would have to prevail on this. You know, monitoring this, policing it […]. But there is a defence for accessing it for journalists; they thankfully can [access it] for academic reasons because I dread to think what my electronic footprint is likely with all the various sites.

Sputnik: Right, anybody who is in law enforcement also likely, I mean, but perhaps lawyers are…There are various professions that would likely have to access these kinds of material. How does this law deal with those? Are there exceptions for certain persons?

David Lowe: Yes, I think because you have mentioned lawyers and quite rightly. If they are prosecuting or defending a case they have to get some access to it. So they would have…and there is that exception in the defence and reasonable excuse. I think that is a reasonable excuse.

Ignorance No Excuse: UK Police Conducted Wrongful Raids Due to Typos, Mistakes
I think what the aim of this is, I mean I am looking at certain cases where, for example, Darren Osborne who drove a van in Finsbury Park into Muslim worshippers there in 2017. He was looking at all sorts of information, from extreme right-wing sides, the English Defence League (EDL), Tommy Robinson's blogs and so on.

This is what they are trying to prevent: people, who are getting influenced by this and carrying out attacks. Khuram Butt, he was involved with the London Bridge and Borough Market attack. He was frequently, and his associates were frequently looking for information on the internet on these sites.

So I think that are the targets of it. I don't think they are targeting those who have a bit of curiosity. But even then there is a degree of concern because then if you are looking at young and vulnerable people looking for this information then obviously hopefully if that is found they will be put under the prevent policy.

*Daesh, also known as IS (Islamic State), ISIS, ISIL is a terrorist group banned in numerous countries, including Russia.