$30 Billion Down the Drain: Five Launched and Trashed Pentagon Projects 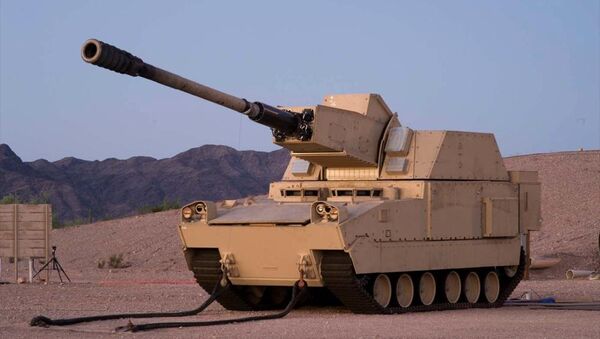 Dramatic geopolitical changes at the end of the 20th century prompted the Pentagon to repeatedly review it doctrine, resulting in a number of abandoned military projects. The National Interest has outlined five flawed initiatives which cost American taxpayers $30 billion.

The US' defence budget still remains the biggest in the world, but that doesn't mean taxpayers' money has always been spent wisely. The National Interest has listed five five hi-tech Pentagon weapons programmes that Washington eventually nixed, thus squandering $30 billion.

The Future Combat System (FCS) programme is the army's most expensive failure, effectively burning $18.1 billion, according to the media outlet.

The modernisation initiative was developed between 2003 and 2009 and envisaged the creation of new brigades empowered by a fleet of ground tanks and troop carriers.

"The FCS was intended to field not just a system, but an entire brigade, a system of systems, with novel technologies integrated by means of an advanced wireless network," a 2010 RAND report said. "Moreover, the FCS-equipped brigade would operate with new doctrine that was being developed and tested along with the materiel components of the unit".

Pentagon Assessment on Troubled F-35 Program Raises Questions, Concerns
However the ambitious project raised questions about its efficiency and proved more expensive than it had been initially estimated and finally, in 2009 then-Defence Secretary Robert Gates brought it to naught.

The super-stealthy light attack helicopter concept originated in the Cold War era with the programme kicked off by 1991. Two stealthy RAH-66 prototypes were built and underwent flight testing between 1996 and 2004. The RAH-66's body was made of radar-absorbing materials to minimise its radar cross section. Boasting the ferry range of 1,200, the chopper was expected to carry a significant load of anti-tank missiles.

However, testing performed in 2003 exposed serious technical challenges and prompted concerns about the RAH-66 survivability. Moreover, as Time Magazine highlighted in 2012, citing military officer and physician Dr. James B. Williams, "the battlefield for which Comanche was designed had grown less probable" as the world changed dramatically between 1982 and 2004.

US' INF Treaty Withdrawal Raises ‘Fears of a Renewed Full-On Arms Race'
Third place in the list of the most expensive projects that never came to fruition is shared by the "Brilliant Anti-Tank Munition" (BAT) and the Crusader self-propelled howitzer projects, which costed $2.2 billion apiece.

The BATs were miniature guided rockets designed to be fired from M270 multiple-rocket artillery systems and capable of independently identifying and attacking armoured vehicles. Like RAH-66, the BAT programme originated Cold War times.

After the collapse of the Soviet Union there was no need for the Pentagon to tackle the threat of the adversary's "tank hordes" and the project was abandoned in 2003.

To sweeten the pill, as The National Interest noted, "at least the BATS was later adapted into miniature GBU-44/B Viper Strike glide bombs employed by drones and Marine KC-130J gunship/tankers".

For its part, the next-generation XM2001 Crusader, a self-propelled howitzer (SPH), that was developed in the 1990s and initially scheduled for fielding by 2008, turned out to be heavy, unwieldy and not corresponding to the needs of rapidly changing environment.

As the New York Times highlighted in 2001, an advisory panel appointed by Secretary of Defence Donald H. Rumsfeld called upon the Pentagon to cancel the Crusader programme, "along with an array of other weapons programs designed, in the panel's view, for cold-war-like battles" which brought the project to the end in 2002.

Ex-Reagan Adm. Official Outlines Three Reasons Why Trump Tore INF Treaty Apart
The Ground Combat Vehicle (GCV) is the Department of Defence's latest failure, costing the US over $1 billion. The project, which was axed in February 2014, envisaged the creation of "networked" vehicles with improved survivability, state-of-the-art mobility and power management functions. However, it was the GVC's excessive 60-tonnes weight that prompted the US Congress to push for the programme's cancellation.

According to the National Interest, the Pentagon is now working on its new Next-Generation Combat Vehicle. However, only time will tell whether the new military endeavour will prove efficient or join the list of failed Pentagon defence spending programmes.