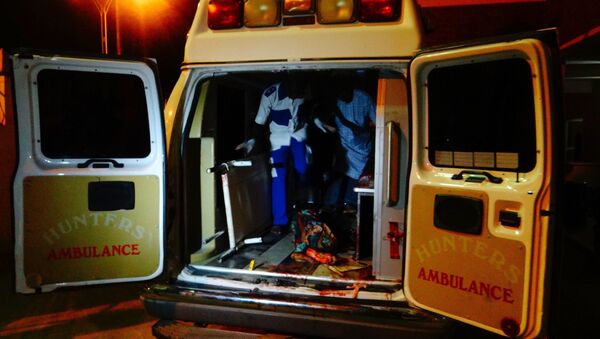 © AFP 2022 / STRINGER
Subscribe
MOSCOW (Sputnik) - At least 14 people have died in a stampede during the rally that Muhammadu Buhari, the incumbent Nigerian president, held ahead of the upcoming general elections, in the southern Nigerian state of Rivers, Kem Daniel-Elebiga, public relations officer at a local hospital, said on Wednesday.

"I can confirm 14 persons dead as I speak. Initially, it was six, but the figures can change as they bring them and [they] are being examined. There are others under medical attention at the Emergency Unit, so we can't force a clear figure beyond what the situation is at the moment", Daniel-Elebiga from the Port Harcourt Teaching Hospital said, as quoted by Nigerian daily newspaper Vanguard.

According to Vanguard, the rally was held inside a stadium in Rivers' capital of Port Harcourt. The stampede started as soon as the president left the venue. Most of the victims fell and were trampled over as Buhari's supporters were trying to break through the locked exit gate.

Elections of the president, the vice president and members of the National Assembly will be held in Nigeria on Saturday. Buhari, who has been ruling Nigeria since 2015, already served as the country's president between 1983 and 1985. Buhari won 2015 Nigerian general elections, becoming the first opposition leader to win the presidency since the country became independent in 1960.

Over 50 People Killed in Communal Clashes in Nigeria – Reports
Buhari has vowed to defeat Boko Haram militants and weed out corruption to improve living standards in Nigeria.

However, the security situation in Nigeria has been deteriorated due to numerous internal conflicts and the surging activity of Boko Haram, which is affiliated with the Daesh* terror group. The militants reportedly killed thousands of people and prompted mass internal displacement of Nigerians from the areas affected by the group’s activities.

In 2017, the country's capital of Abuja saw a wave of rallies. Some of the protesters demanded the resignation of Buhari, who had spent a large part of 2017 in the United Kingdom for medical treatment, over claims that he was unfit for office. The protesters also called on the authorities to disclose the nature of Buhari's medical problems.