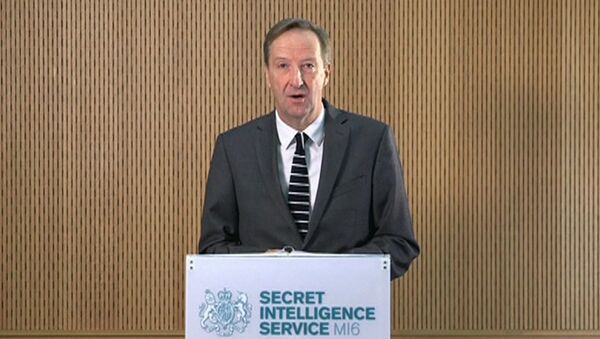 © REUTERS / Crown Copyright/Handout
Subscribe
Theresa May has told MPs to "hold our nerve" to force the EU to renegotiate a critical element of her Brexit deal. Currently Britain is set to crash out of the EU on 29 March, without any deal in place.

The head of MI6 is expected to stay on beyond his retirement date in November to oversee any problems in the aftermath of Brexit, according to The Times.

Alex Younger, 55, has been in the role for five years but the newspaper claims sources close to him say the UK government wants him to stay on for at least 12 months.

Last week one of Britain's most senior police officers said Britain would be "less safe" if there was a no-deal Brexit because the EU arrest warrant would no longer be effective and police would not be able to check the database of European criminals.

Former Attorney General Dominic Grieve says "the penny is beginning to drop" among politicians, including some of his Conservative colleagues, that "there is no form of Brexit that is going to benefit our country."

​Mr. Younger's direct boss is the Foreign Secretary, Jeremy Hunt, but a decision to prolong his contract — making him the longest serving MI6 chief since the height of the Cold War — would have to be signed off by the Prime Minister.

The Times said the period after 29 March would be one of great upheaval and it would not be advisable to have a change at the top of MI5 or MI6.

The news comes as Britain's chief negotiator Olly Robbins was reportedly overheard in a Brussels bar saying the EU was likely to allow an extension beyond 29 March.

The UK’s Brexit negotiator is talking about a long delay to Article 50. The establishment are betraying Brexit.

I am now sitting as an MEP for The Brexit Party in the European Parliament.

​Referring to the reports, Mrs. May said MPs should avoid basing their decisions on "what someone said to someone else as overheard by someone else, in a bar".

"It is very clear the government's position is the same. We triggered Article 50 (the process by which the UK leaves the EU)… that had a two-year time limit, that ends on the 29 March," she said in Parliament on Wednesday, 13 February.