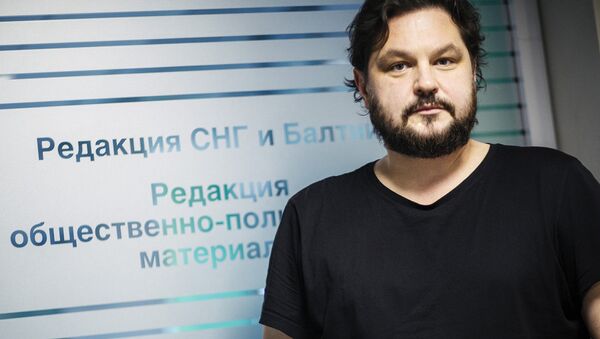 "Facebook has recently opened a 150-member Riga office and is still hiring. It monitors what people in the Baltics post on the social network website. A staffer or someone who aspires to be one must have informed them about the broadcast from my account, causing it to be shut", he said.

The airing of last Saturday’s massive rally in support of embattled Riga Mayor Nils Usakovs was watched and reposted by thousands of people. The leader of the popular leftist Harmony party survived a no-confidence vote this Monday, called by right-wing opposition over graft claims.

Sputnik Considers Removal of Agency-Linked FB Accounts 'Politically Motivated'
Rozencovs’ account on Facebook was first purged in January when the California-based social networking giant removed over 500 pages and accounts linked to Russia, citing perceived attempts to manipulate people in the Baltics and elsewhere.

Sputnik global editor-in-chief Margarita Simonyan said the fact that Rozencovs’ private page was targeted again after broadcasting a rally in support of Usakovs was no coincidence. The mayor of the Latvian capital is routinely described in Western media as being pro-Kremlin.

Last July, Valentins Rozencovs said that he had been detained in Riga by the security police upon his arrival from Moscow and released almost 12 hours later. He noted that security services questioned him about his work as Sputnik Latvia's senior editor and the outlet's work in the country.