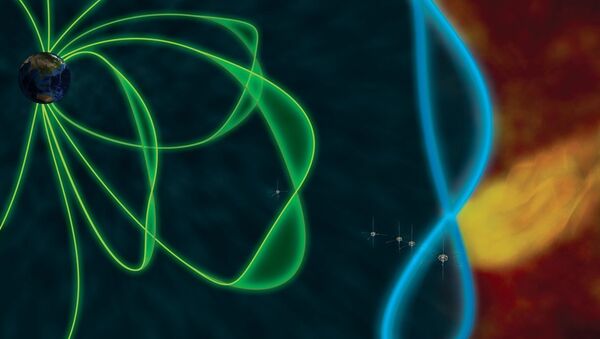 Earlier, scientists were forced to update the World Magnetic Model representing our planet's magnetic field after discovering that the magnetic North Pole was moving from the Canadian Arctic towards Russia's Siberia at a worrying pace.

The magnetic field protecting Earth from deadly solar impulses makes a sound akin to a heartbeat or water or a gelatin-filled drum, a groundbreaking study based on data from five NASA THEMIS space probes has revealed.

The sound, inaudible from our planet, and with a pitch 10,000 times too low to be audible to the human ear even in space, was picked up by super-sensitive satellite instruments aboard the THEMIS probes when impulses struck the planetary magnetic field's outer boundary, known as the magnetopause, with jolts rippling through the defensive shield to the magnetic poles before being reflected back to space.

The study, conducted by researchers from Queen Mary University of London, is the first direct confirmation of a theory of drum-like beats caused by the magnetopause going back to the mid-1970s.

US Geologist REVEALS How Fast-Shifting North Magnetic Pole Will Affect Humanity
Proving the barely audible phenomenon required five NASA satellites to be aligned in just the right places near the magnetosphere's boundary to capture the vibrations.

In addition to solar winds, Earth's protective magnetopause is affected by charged plasma particles from our Sun, Dr. Martin Archer, a space plasma physicist and lead author of the new research, said.

Speaking to Live Science, Archer said that his team's work required expanding on the original theory to combine "more realistic models of the entire dayside magnetosphere, as well as running global computer simulations of the magnetosphere's response to sharp impulses."  This gave the scientists "testable predictions to search for in satellite observations," he noted.

"We found the first direct and unambiguous observational evidence that the magnetopause vibrates in a standing wave pattern, like a drum, when hit by a strong impulse," Archer said. In proving the old theory, researchers confirmed that "Earth's magnetic field is a gigantic musical instrument whose symphony affects us greatly through space weather. We've known analogues to wind and string instruments occur within it for decades, but now we can add some percussion into the mix too," Archer quipped.

Other planets, including Mercury, Jupiter and Saturn may have similar magnetic shields, and drum-like beats may be possible there too, according to scientists.

The new study can be found in the Nature Communications journal here.