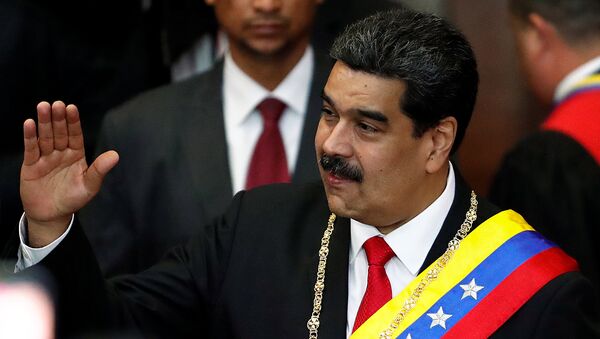 "Within days, Maduro's dictatorship will cease to exist. The people of Venezuela have opened door to freedom and democracy, with courage and happiness. Now they should move toward a free and prosperous country that lives in peace. All the democrats across the world share this happiness," Pinera posted on Twitter.

Earlier in February, Colombian President Ivan Duque equally voiced the belief that Maduro, with whom he has long been at loggerheads, would soon lose his post.

At the same time, US Special Representative for Venezuela Elliott Abrams suggested earlier that Venezuelan President Nicolas Maduro should leave the country, and such "friends as Cuba or Russia" would gladly accept him.

Maduro himself has accused Washington, which has stated that it has all options on the table with regard to a response to the Venezuelan crisis, of organising a coup in the Latin American country.

Maduro Supporters Gather in Caracas Following Pro-Guaido Rally (VIDEO)
Tensions in Venezuela escalated when Juan Guaido, the head of the opposition-led parliament, declared himself interim president on January 23, disputing Maduro's re-election, which took place last year. Guaido's declaration was almost immediately recognized by the United States and some of its allies. EU states were expected to issue a joint statement recognizing Guaido, who has been slammed by Maduro as a "US puppet," but Italy vetoed the motion, according to a Sputnik source.

000000
Popular comments
It's at times like this that you can see who are the puppets of the big corp globalists. People! Keep this in mind next time you vote, if you still have such a choice - not much freedom left in this globalist controlled world. Hello 1984! Hello Brave New World! Hello Dystopia!