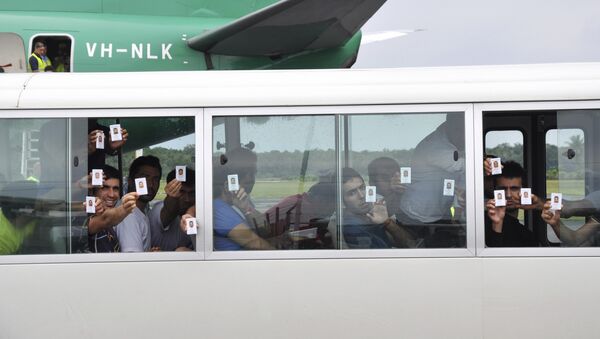 © AP Photo / Eoin Blackwell/AAP Image
Subscribe
Immigration has always been a hot topic for Australia. But this week the row on the issue took a new turn, following the passing of a new law that allows sick refugees held offshore to be treated in the country. What happened?

Sputnik: The new law gives doctors instead of bureaucrats the right to decide which of the asylum seekers held in camps on Pacific island nations can fly to Australia for hospitalisation. It sounds like a logical approach to the issue, right?

Elizabeth Elliott: When people are sick and require a transfer for appropriate investigations or treatment it's far more appropriate that these decisions are being made by a doctor than a bureaucrat, who doesn't understand the health implications for that particular person.

So I'm really very much in favour of doctors being involved in that decision-making process. And I believe that it will perhaps prevent some of the unnecessary delays that have really resulted in worsening illness in people who need medical treatment.

Australia Rules Out Signing Global Migration Compact in Current Form - Minister
Sputnik: Australia's Prime Minister Scott Morrison called the legislation a “foolish law,” as it would trigger a new wave of migrant arrivals to Australia. What do you think of the PM’s words?

Gillian Triggs: This law allows a medical judgment to be made that is not overturned ultimately by the [Prime] Minister on national security grounds. It enables these people to get to Australia for proper medical care, and the situation has been so fraught for so long that, in a way, this law is a relief, and at least offers the opportunity for some kind of humane and proper medical treatment for these people.

Australia has an armada of ships and border force authorities that stop asylum seeker boats; a relatively few who are currently attempting to get through are stopped, they're turned around, and sent back into predominantly Indonesian waters.

So even if the prospect of medical care were available to those on Manus [Island] and Nauru, a delivery of those medical services in Australia, I cannot see how they could possibly lead to any successful arrivals for asylum seekers within Australian jurisdiction.

So it's a ridiculous argument that suggests that providing medical care will lead to an influx of new asylum seekers.

Australia to Support US in Migration, Border Protection Policy
Sputnik: Amnesty International has decried the Christmas Island camp, and its Refugee Coordinator Graham Thom told US network ABC the facility had “a prison regime and a very prison type feel.” Even the UN joined the debate and criticised Australia's detention policies, calling them "inhumane.” Since you have visited Christmas Island, how bad are the living conditions in the camp?

Elizabeth Elliott: I was certainly shocked by the conditions that we saw there: first of all, it's in a very remote location — closer to Jakarta than any Australian major city. It is hot. It is wet.

There's a film of phosphate dust everywhere, because it was originally a phosphate mine. And the camp itself has very high fences, strict security. It's a very unpalatable place.

Sputnik: So will living conditions in the Christmas Island detention camp be different this second time around?

Elizabeth Elliott: The quality of life could be improved by living in a better climate in closer proximity to healthcare and other facilities.

Refugees Threatened, Forced to Leave Australia's Closing Manus Detention Center
So I think really what we should be doing with the passing legislation is having a total rethink on how we approach the issue of detention of people seeking asylum in this country, and make sure that, above all, we prioritise the fact that we are giving them the healthcare that any Australian deserves, and that we are appropriately acknowledging their human rights.

Sputnik: Supporters of the detention camps say the importance of the Christmas Island camp is to send a strong message to economic migrants that there is no easy way into Australia. But could the reopening of the centre be a deterrent for such individuals?

I don't think that most desperate, genuine asylum seekers have any concept of what's likely to face them when they come to Australia. Although I imagine that people smugglers probably do.

But perhaps I should point out, though, as distinct from Europe, the Mediterranean, those asylum seekers that come in through Asia, through to Indonesia and ultimately into the Indian Ocean and Australian jurisdiction, 80% of them are or do meet the definition of refugee.

So when you talk about those who are essentially economic migrants, of course, some are, but they are always vulnerable to being returned to their country of nationality, if they're judged not to be asylum seekers and meeting the legal definition for refugee.

So we're actually talking about quite a small number of people; overwhelmingly, those who do come into the Asian region are genuine refugees.