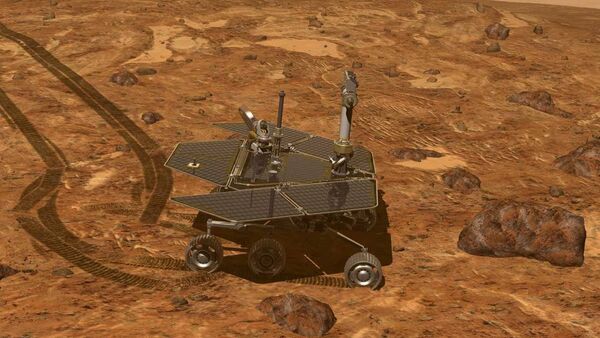 © AP Photo / NASA
Subscribe
The US space agency NASA declared the mission of its Opportunity rover on Mars to be complete Wednesday after it failed to answer more than 1,000 wake-up commands. Originally expected to last only 90 days, the Opportunity mission explored the Red Planet for nearly 15 years, making key discoveries about Martian geology.

Mars Rover Snaps 360-Degree Photo of Red Planet’s Surface (VIDEO)
With Opportunity not having responded to a final attempt on Tuesday to wake-up commands from the command center in California, "it is therefore that I'm standing here with a sense of deep appreciation and gratitude that I declare the Opportunity mission as complete," Thomas Zurbuchen, associate administrator for the Science Mission Directorate, said in a Wednesday news conference at the Jet Propulsion Laboratory. "It's an emotional time."

NASA lost contact with Opportunity on June 10, 2018, after a huge dust storm covered the planet, obscuring the sun, which blocked the rover's solar panels from collecting energy to power its systems, Motherboard reported. 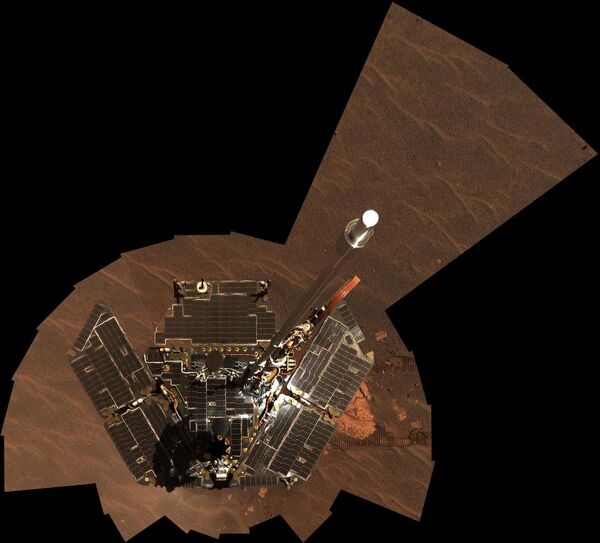 Martian Dust Storm Now Envelops Entire Red Planet
When the dust cloud cleared, there was no word from Opportunity. Scientists judged that perhaps its internal clock was so scrambled that it no longer knew when to sleep to conserve energy or wake up to receive commands.

Since then, the JPL has tried over 1,000 times to re-establish communication, to no avail.

"It's just like a loved one who's gone missing, and you keep holding out hope that they will show up and that they're healthy," project manager John Callas told AP Tuesday. "But each passing day that diminishes, and at some point you have to say 'enough' and move on with your life."

NASA Administrator Jim Bridenstine said Wednesday that the mission's end was a "celebration of so many achievements," noting first and foremost the rover's incredibly long life: expected to last just three months and travel a couple hundred meters, Opportunity kept on keeping on for 14 and a half years, covering 28 miles in that time. 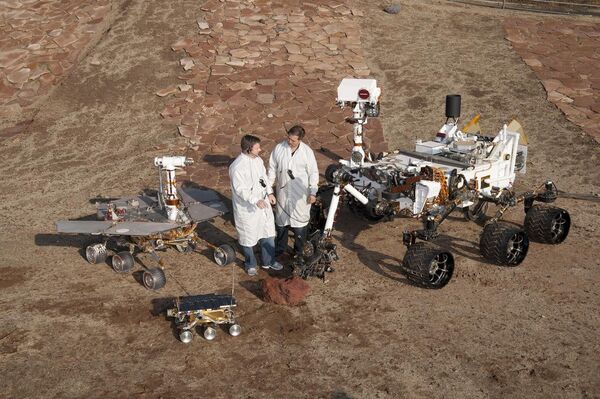 The golf cart-sized vehicle launched in 2003 with a twin, the Spirit rover, which landed on the opposite side of Mars. Spirit, too, lasted much longer than planned, finally going dim forever in 2010 after a sand trap crippled the machine, limiting its ability to reorient and receive adequate sunlight to power itself. 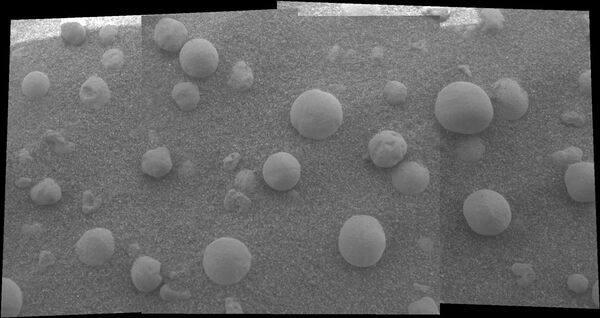 This mosaic image shows an extreme close-up of round, blueberry-shaped formations in the martian soil near a part of the rock outcrop at Meridiani Planum called Stone Mountain. Scientists are studying these curious formations for clues about the area's past environmental conditions.
© NASA . NASA JPL

The two rovers' greatest achievement was finding firm proof that water that could have sustained microbial life had once flowed on the Martian surface. However, they did far more than that. Opportunity examined the first extraterrestrial meteorite and traveled 28 miles across the Meridiani Planum, which the mission crew affectionately called a "marathon," setting a new record for longest distance of any off-Earth terrain vehicle. The Soviet Union's Lunokhod 2 rover had previously driven 24 miles across the moon in 1973.

Eleven years and two months after its landing on Mars, the total driving distance of NASA's Mars Exploration Rover Opportunity surpassed the length of a marathon race: 26.219 miles (42.195 kilometers). This map shows the southward path driven by Opportunity from late December 2014 until it passed marathon distance on March 24, 2015, during the 3,968th Martian day, or sol, of the rover's work on Mars.
© NASA . NASA JPL

Red Tide? Underground Water Reservoir Found Beneath Mars’ South Pole
By the end of its life, Opportunity's costs were ballooning to $500,000 a month, and NASA scientists were finding ingenious new ways to keep the rover going. JPL Director Mike Watkins explained that they had rigged a system in which they turned the rover off at night to save energy, which he likened to flipping the breaker on your house off at night to turn the light out, and back on in the morning before the ice cream melts. Since the rover's flash memory stopped working — a problem Spirit also encountered — it couldn't remember anything before last shutting down, meaning it had to transfer all information it collected every day back to Earth — a 13-minute trip, even at the speed of light.

But this isn't the end of NASA's exploration of the Red Planet — not by a longshot. In late November, NASA's InSight lander put down on Mars, with the mission of exploring the inside layers of the planet and determining whether its core remains molten, like Earth's, or has totally solidified. Other rovers, such as Curiosity, are still chugging across our planetary neighbor. Plus, the space agency plans on launching the Mars 2020 rover next year, which might include an attempt at returning a sample from Mars back to Earth.

000000
Popular comments
From 90 days to 15 years! How to explain this? There are "those" who believe NASA tapped into a secret energy source on Mars, a source known only by them.