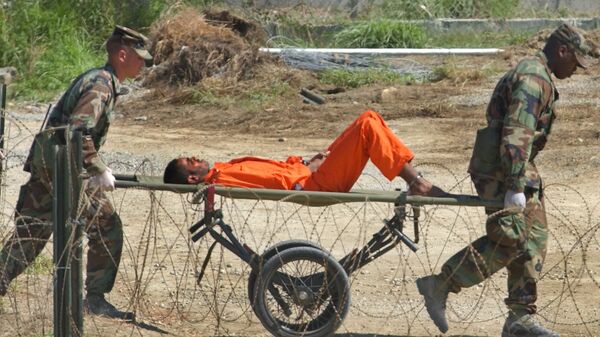 © AP Photo / Lynne Sladky
Subscribe
International
India
Africa
WASHINGTON (Sputnik) - The Department of Defense (DoD) needs to assess the tradeoffs associated with expanding public access to and open information about terrorism trials at the US detention facility at Guantanamo Bay, Cuba, the Government Accountability Office (GAO) said in a report.

Some victims and family members of victims of the September 11, 2001 terrorist attacks against the United States and other members of the public, wanted better access to pre-trial hearings of alleged terrorists held at Guantanamo Bay, the GAO acknowledged.

Options to increase access include adding closed-circuit television sites for the public and broadcasting via television or the internet, the report said.

Trump Mulls Sending Captured Top-Ranking Daesh Fighters to Guantanamo - Reports
The Guantanamo facility was established by the United States in 2002 in Cuba amid the post-9/11 war on terror to jail terror suspects indefinitely and became notorious for human rights abuses. Since opening, Guantanamo has reportedly held a total of over 700 prisoners.

Barack Obama has promised to close the prison but failed to fulfill his pledge since the US Congress refused to allocate funds for the facility’s closure.

In January 2018, Trump announced that he had signed an order to keep Guantanamo open but no new prisoners have been reportedly transferred to the facility since that.

According to Amnesty International, a total of 40 individuals, all of them Muslim, are currently imprisoned in Guantanamo. Amnesty further claimed that many of the prisoners had been tortured, while others had been authorized for transfer to other detention facilities, yet remained in Guantanamo.