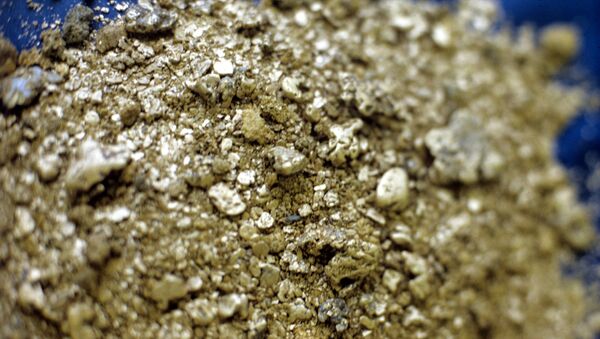 In addition to its vast oil reserves, Venezuela is believed to have 10,000 tonnes in unmined gold, with most of it located in the country's southeast.

About 300,000 prospectors working in make-shift mines in the jungles of Venezuela are helping provide Caracas with much-needed means to stay afloat and pay for food, medicine, hygiene products, and other crucial imports.

According to new Venezuelan Central Bank data, small-time prospectors have sold a whopping 17 tonnes of the precious metal to the government since 2016, with the haul valued at about $650 million.

French Oil Giant Total Could Stay in Venezuela Despite US Sanctions - CEO
The work is heavy, rough, and dangerous, with one young worker telling Reuters that he has contracted malaria five times, adding that he works 12-hour shifts, carrying bags of earth laden with flecks of gold to a crude mill at a mine near the Brazilian border. Workers often use primitive tools, including picks, pulleys and winches, and sometimes dig tunnels by hand.

Accident rates are high, as is crime thanks to roving gangs looking to cash in on the gold rush.

Still, because hyperinflation continues to eat into the wages of those working official jobs, gold mining remains an attractive proposition to some, one worker told the news agency.

"The state is buying gold, everyone is buying gold, because it's what is doing well," Jhony, a gold wholesaler from Puerto Ordaz, a town about 650 km southeast of Caracas, said. Jhony sells his gold on to the government, which smelts it at furnaces belonging to Minerven, the country's state-run mining concern.

The company, which holds about 56 per cent of total declared production, was slapped with sanctions in November.

Most of Venezuela's mined gold is believed to be sold on to Turkish refineries. Last week, Bloomberg reported that Sardes, a Turkish gold broker, had shifted some $900 million-worth of the precious metal to Turkey before US sanctions on the Latin American state's assets went into effect. In exchange, Venezuela has used some of the money to buy Turkish food products including pasta and powdered milk, with trade between the two countries climbing from $804 million over a five-year period from 2013, to some $892 million between January and May of 2018.

US Blockade Has Cost Every Man, Woman & Child in Venezuela Over $12,000 - Report
Venezuela was forced to begin selling off some of its foreign reserves, including gold, in 2016, amid pressure from US sanctions and financial restrictions recently estimated to have robbed the government of up to $350 billion in revenue in recent years.

The long-running political and economic crisis in Venezuela escalated last month after opposition leader Juan Guaido proclaimed himself interim president, in a move that Caracas described as an attempted coup d'état. The US, Canada, and more than a dozen European and Latin American countries voiced their support for the takeover attempt, while Russia, China, Mexico, Cuba, Bolivia, Nicaragua, Iran and Turkey condemned it and urged outside powers not to meddle in Venezuela's internal affairs.