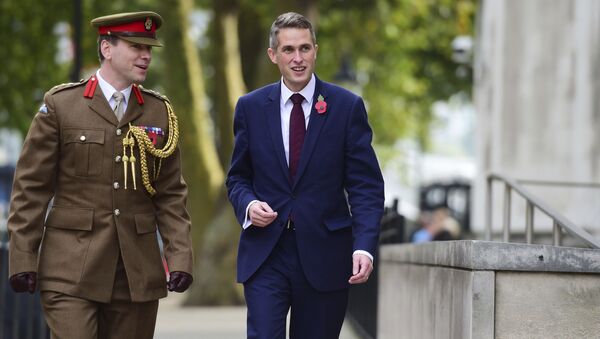 © AP Photo / David Mirzoeff
Subscribe
The UK should strengthen its global presence and enhance its lethality according to UK Defense Minister Gavin Williamson as he addressed the Royal United Services Institute on Monday.

The cabinet minister unveiled plans to modernize and strengthen the UK armed forces to prepare Britain in the post-Brexit world. Williamson spoke about UK plans to send its new aircraft carrier to the Pacific – where there is currently a territorial dispute in the South China Sea — invest in offensive cyber capabilities and adopt a harder military stance after Brexit. The UK withdrawal from the EU is of course only weeks away as Prime Minister Theresa May tries to strike a last-minute deal with Europe.

There was also another warning to Russia and China as he is to say that Britain must "be ready to show the high price of aggressive behavior" and prepared to "use hard power to support its interests". He emphasized that the lines between peace and war for nations such as Russia and China are becoming increasingly "blurred".

Sputnik: What do you make of Gavin Williamson’s comments that Britain should ‘increase its lethality’ — surely this rhetoric is more aggressive than defensive and potentially dangerous at a time when we have the US and Russia withdrawing from the INF nuclear arms reduction treaty?

Beijing Accuses US of Illegally Crossing Its Sovereign Borders in S China Sea
George Szamuely: Yes, absolutely, it’s extremely dangerous and extraordinarily reckless on the part of Williamson to be talking like this.

Because he is suggesting that Britain is to be going out of its way to provoke conflicts with China in the South China Sea and of course he intends to be provoking conflicts with Russia in the Baltic and in Ukraine.

If you remember a couple of months ago he was actually in Ukraine and pretty much saying that Britain is fighting side by side with Kiev against Russia.

This kind of talk is absolutely insane because if Williamson were to have its way, Britain would be finding itself in a shooting war against powers that are much stronger than Great Britain and it would lead to devastating consequences.

Sputnik: Williamson also mentions in his speech that cost of non-interventions has often been “unacceptably high” and argue that Western powers cannot ignore those in need as “to talk but fail to act risks our nation being seen as little more than a paper tiger.” do you think we will see the UK engage in more military interventions as it tried to re-assert itself in the post-Brexit world?

Russia Vows Response as UK Defence Chief Issues 'Warning to Putin'
George Szamuely: Well, I think that’s quite likely; we’ve already seen this with Theresa May happily signing on to the missile attacks on Syria and she was also involved in the threats last year of extensive attacks on Syria should the Russians try to take Idlib. So I think that’s very likely. And the ridiculousness of Williamson’s assertions; when you think of what Britain has done just in the last two decades — the aggressive acts that it has engaged in, starting with Yugoslavia, Iraq, Libya, Syria – all of that Britain has been engaged in. Russia and China haven’t done anything!

It is absolutely absurd and it’s going to lead to a catastrophic confrontation. And what Britain will find, is that if it does get involved in some kind of a shooting war with China and Russia, the United States is not going to go in and bail the British out, it’s not going to pull Britain’s chestnuts out of the fire, Britain will find itself on its own and will have to essentially climb down with its tail between its legs; much as Erdogan had to do when it shot down a Russian aircraft – thinking that NATO would back it up – it didn’t. And much as Ukraine found when it thought that its provocation in the Kerch strait would get support from the United States – it didn’t.

And Britain will find itself in much the same position – that it’s on its own and it’s having to deal with the Chinese in the South China Sea – not a good situation to be in.

Views and opinions expressed in this article are those of George Szamuely and do not necessarily reflect those of Sputnik.

000000
Popular comments
Thankfully Brits have lost the empire, so all they have left now is barking of course. just like their master USrael. Citizens of both countries must know that they still mean something.