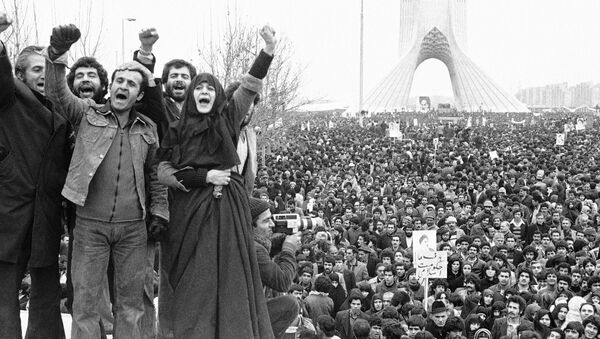 © Photo : Aristotle Saris
Subscribe
Iran is marking the 40th anniversary of the country's Islamic Revolution. In light of the occasion, Sputnik spoke to journalists, geopolitical observers, and academics about the achievements and setbacks Iran has faced in the four decades after the revolution, and its significance in broader world history.

On 11 February 1979, guerrillas and rebel forces overwhelmed troops loyal to US-backed ruler Mohammad Reza Shah Pahlavi in street clashes in the Iranian capital, bringing a dramatic culmination to months of upheaval, street protests, and behind-the-scenes political and diplomatic manoeuvring which ultimately led to the establishment of the Islamic Republic.

Notwithstanding Washington's firm alliance with the shah, months of intensifying protests and fears of the rise of new political forces eventually deterred Western states from militarily intervening in the country's unfolding events.

The United States, despite having armed the Iranian military to its teeth over the previous two and a half decades and essentially controlling the country's armed forces, did little to stop its ally from being toppled, Dr. Nawar Kassomeh, a scholar at Lancaster University, pointed out.

WATCH Celebration of 40th Anniversary of Islamic Revolution in Iran
One of the reasons is that Washington, as well as its allies, “favoured the removal of the shah from power in order to preserve the army and avoid a communist revolution in Iran", Dr. Misagh Parsa, a professor of sociology at Dartmouth University noted.

Moreover, Dr. Nawar Kassomeh said that the “French were probably involved in an implicit way to support the revolution direct involvement in the events.”

"Khomeini as we know was living in France and went to Tehran on a French airplane," he recalled. 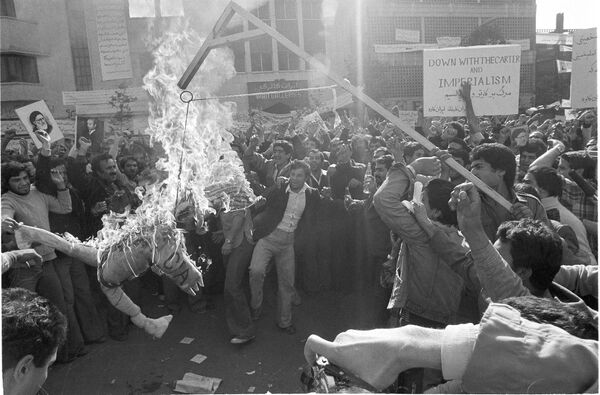 Flashback From Iran’s 1979 Takeover of US Embassy
© AP Photo

Whatever role Western states may have played, observers stress that foreign actors could not have been the deciding factor in the success of the revolution.

The Islamic Revolution became “a statement by the Iranian people that they were going to get back to their own tradition, which is a particular way of practicing Islam,” independent Arabist-Islamologist scholar Dr. Kevin Barrett argued.

“They were able to get their independence by mobilising this Iranian Islamic heritage and coming up with a new style of governance – a democratic republican system with the traditional Islamic scholars in the place of the judiciary," Barrett said.

Despite the revolution's success in mobilising people from various political, religious and minority viewpoints, including Sunnis, Kurds, and Baloch people, Dr. Kassomeh argued that the "Khomeini model" of governance in Iran that emerged after the revolution failed to be significantly more democratic than that of its predecessor, the shah.

Zarif Says Iran's Jews Revel in '40 Years of Progress'
The Islamic Republic, Kassomeh contends, remains exclusionary to various political, religious and minority viewpoints that don't match of the ruling Shia Iranian interests. "Khomeini claimed that the Islamic Revolution rejected the Persian model of the Shah, while in fact his model was Persian but with an Islamic template," he said.

Nonetheless, the system proved viable, and, despite severe pressure from the US, has managed to make serious strides in improving the lives of ordinary Iranians, while preserving the republic's independence.

"It's an interesting system; it works. They've made great strides in the human development index and they've been absolutely independent. They haven't been pushed around by the big powers since 1979," Dr. Barrett said. 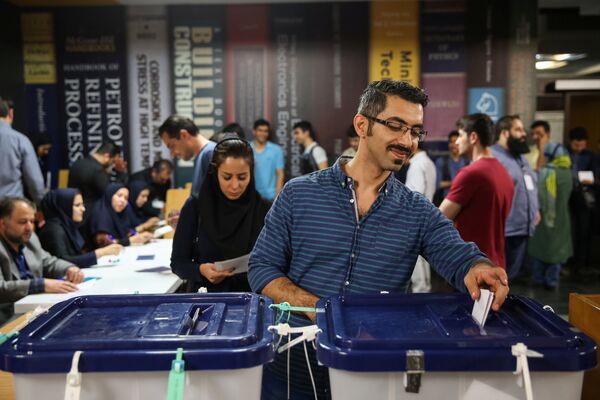 Iranians cast their votes during the presidential election in a polling station in Tehran, Iran, May 19, 2017
© REUTERS / TIMA

Dr. Hamed Mousavi, a professor of political science at the University of Tehran, pointed out that "in the past four decades, the number of university students has increased by 25 times. Also, adult literacy has gone up from about 45 percent in 1979 to over 95 percent today…Today, more females are admitted to Iranian universities than males."

Iran has also scored impressive achievements in science, as well as the creation of civilian and military technologies which have enabled the country to gain self-sufficiency in advanced fields like rocketry, satellite and missile technology. Over the least 15 years, the government has also invested heavily in advanced technologies in fields including neuroscience, biotech, physics and materials science, and nanotechnology. 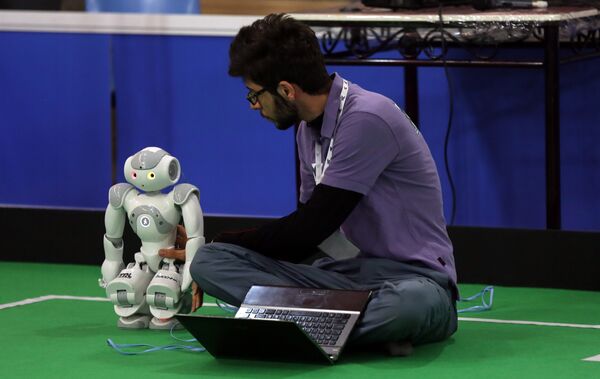 Apart from the internal changes, the events of 1979 in Iran had a tremendous impact on regional and international politics.

Through the revolution, Iran "demonstrated to the world that it will stand up to what they define as the imperialists in the West, particularly the United States," Alexander Azadgan, senior geopolitical analyst and editor-at-large with Imperia News, said. The revolution was "one of the most successful movements in the colonised world to get genuine independence" from Western forms of neocolonialism," the observer said.

Meanwhile, Dr. Henry J. Leir, a professor of the economics of the Middle East at Brandeis University, argued that one of the most significant consequences of the Islamic Revolution in Iran for the region was the "change in position and power of the United States."

Iran "became a direct challenge to the US in the region, because the new government that emerged, which the United States thought might be neutral or even cooperative with Washington, over a course of events became a strong opponent of US interests, and tried to challenge US interests in every part of the Middle East region," Dr. Leir said.

In the years following the revolution, the US and its allies attempted to cripple or topple the revolution by any and all means possible, providing support to opposition forces, and even to Saddam Hussein's invasion of Iran in 1979.

Whatever one's views on the Iranian Revolution may be, it can't be denied that it has stood the test of time, along with immense pressure from the world's most powerful superpower, and fundamentally changed the Middle East as we know it. 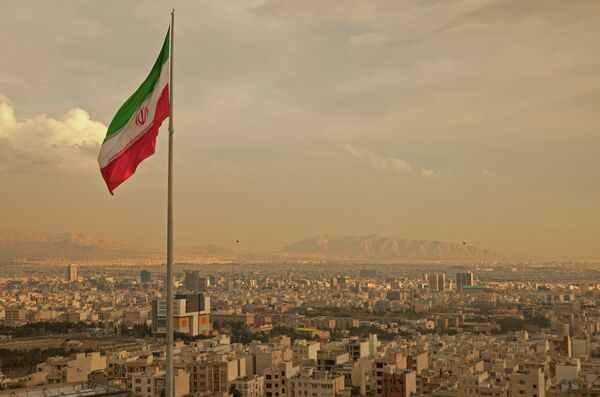 View of the Tehran, Iran
© Fotolia / Borna_Mir
000000
Popular comments
Iran did what's should dare Europe: begin to Be and to say no to whom play with Her...
francescoslossel
11 February 2019, 19:55 GMT
000000
francescoslossel, you are right. No one can help those impoverished if they do not have the will to help themselves. Although it sounds all very very interesting (since the national currency IS RIAL) Iranian people have made their statement to the world and the ideological base is roughly favourable to even older age fraternal ties between Asia and Aurope (Europe) - 'in ascendere'. Once all the matters clarified, we shall start building connecting Alexandrias and carry on with ... the ancient dream. Bless the pure hearts and godly minds of Iran and all Asia.
Lissandra
12 February 2019, 21:48 GMT1
000000
Newsfeed
0
New firstOld first
loader
LIVE
Заголовок открываемого материала
Access to the chat has been blocked for violating the rules . You will be able to participate again through:∞. If you do not agree with the blocking, please use the feedback form
The discussion is closed. You can participate in the discussion within 24 hours after the publication of the article.
To participate in the discussion
log in or register
loader
Chats
Заголовок открываемого материала
Worldwide
InternationalEnglishEnglishMundoEspañolSpanish
Europe
DeutschlandDeutschGermanFranceFrançaisFrenchΕλλάδαΕλληνικάGreekItaliaItalianoItalianČeská republikaČeštinaCzechPolskaPolskiPolishСрбиjаСрпскиSerbianLatvijaLatviešuLatvianLietuvaLietuviųLithuanianMoldovaMoldoveneascăMoldavianБеларусьБеларускiBelarusian
Transcaucasia
ԱրմենիաՀայերենArmenianАҧсныАҧсышәалаAbkhazХуссар ИрыстонИронауОssetianსაქართველოქართულიGeorgianAzərbaycanАzərbaycancaAzerbaijani
Middle East
Sputnik عربيArabicArabicTürkiyeTürkçeTurkishSputnik ایرانPersianPersianSputnik افغانستانDariDari
Central Asia
ҚазақстанҚазақ тіліKazakhКыргызстанКыргызчаKyrgyzOʻzbekistonЎзбекчаUzbekТоҷикистонТоҷикӣTajik
East & Southeast Asia
Việt NamTiếng ViệtVietnamese日本日本語Japanese中国中文Chinese
South America
BrasilPortuguêsPortuguese
NewsfeedBreaking
11:34 GMTEuphoric Cricketers Celebrate as Team India Register Historic Win Over Kiwis in Mumbai Test Match
11:14 GMTUK Trade Secretary Visiting US 'to Deepen Relations' Amid Bilateral Tariff Row
10:58 GMTLIVE UPDATES: Vladimir Putin Leads Delegation to New Delhi for 21st Annual India-Russia Summit
09:51 GMTKremlin Calls US-Russia Ties 'Lamentable' on Eve of Putin-Biden Video Call
09:37 GMTPeskov to Sputnik: Russia, India Should Boost Cooperation Amid New 'Sore Spots' in Asia-Pacific
09:33 GMTThirteen Pilgrims Injured in Drunk Driving Accident in Mexico City
09:07 GMTWoman Accusing Chris Cuomo of Sexual Misconduct Used to Work With Ex-CNN Host at ABC, Media Says
09:05 GMTVenezuelan 'Opposition Government' FM Resigns, Slamming It for Corruption and Incompetence
08:50 GMTTaiwan to Accelerate Construction of Home Grown Submarine Prototype, Reports Say
08:31 GMTRussia, India Sign Military Cooperation Agreement for Next Decade
08:17 GMTArgentina Greenlights Sputnik Light Both as COVID-19 Vaccine and Booster Shot
08:13 GMTDoctors in India Hold Nationwide Protest Against Delay in Medical Exam Counselling
08:12 GMTOne Year After Israel-Morocco Normalisation Pact, Trade and Business Still Sluggish
07:49 GMT'Sleepy Joe Stole Christmas': Trump's Save America PAC Pans Biden for Nightmare Supply Chain Crisis
07:14 GMTIndia and Russia Sign Number of Military Agreements and Contracts
07:13 GMT'You Can't Erase Internet': Alec Baldwin Slammed for Deleting Twitter Account After Rust Interview
07:08 GMT'World-Class' 1,000-Year-Old Egyptian Earring Found in Danish Field Perplexes Researchers
07:04 GMTKylian Mbappe Opens Up on His PSG Future Amid Real Madrid Transfer Rumours
06:55 GMTPoll: Most Japanese Back Ban on Visas for Foreigners Amid Omicron Concerns
06:48 GMTOne Dead and Four Injured in Prison Fire in Northwestern Russia