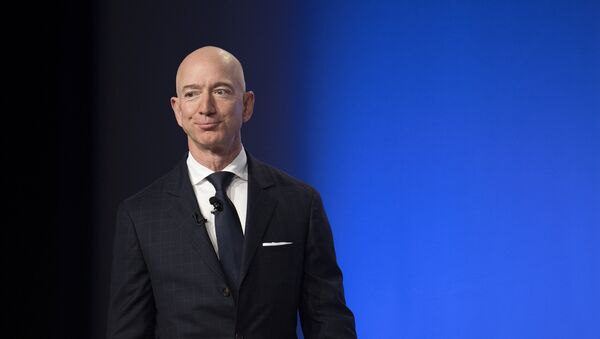 The person who provided The National Enquirer with explicit text messages and images exchanged by Amazon CEO Jeff Bezos and his mistress Lauren Sanchez, turned out to be none other than Sanchez’s brother Michael, The Daily Beast reports, citing several sources within the tabloid’s parent company, American Media Inc.

Bezos Says National Enquirer Tried to Blackmail Him With Intimate Photos
According to the media outlet, the information about Michael first supplying Bezos’ text to The National Enquirer was also confirmed by “another source who has been in extensive communication with senior leaders at AMI”.

This revelation emerged after Elkan Abramowitz, attorney to AMI CEO David Pecker, declared that the information about the affair were provided to the tabloid by a source known both to Bezos and Sanchez, as well as to "any investigator who was going to investigate this”.

"It was not the White House. It was not Saudi Arabia. And the libel that was going out there slamming AMI was that this was all a political hatchet job sponsored by either a foreign nation or somebody politically in this country," he said.

Abramowitz, however, declined to confirm the identity of the source, only stating that it was not US President Donald Trump, Roger Stone or Saudi Arabia.

The National Enquirer, which is published by American Media Inc., recently revealed a series of lurid text messages between Bezos and former news anchor and helicopter pilot Lauren Sanchez, a woman he was having an affair with prior to announcing his divorce from wife MacKenzie Bezos.

According to Vanity Fair, the tabloid also obtained a number of compromising photos of Bezos and Sanchez, including a “below the belt selfie — otherwise colloquially known as a 'd--k pick'".

In response, Bezos later hired an investigator and began to suggest that the publication of his texts was a politically motivated move on account of them being leaked by The National Enquirer. AMI is owned by David Pecker, a long-time friend of US President Donald Trump, and Bezos has justified his claims by citing these ties.