Tusk Warned EU-Turkey Migration Deal 'Would Be a Catastrophe' – Report 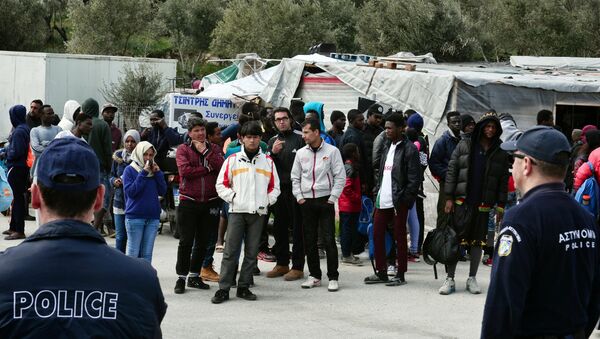 Under the March 2016 deal between the EU and Turkey, Ankara pledged to take back any illegal migrants who arrived in the Union after departing its territory and instead send legal Syrian refugees to the bloc.

A new BBC2 documentary has revealed that German Chancellor Angela Merkel's private talks with Turkish officials in 2016 to discuss the flow of migrants into the EU infuriated European Council President Donald Tusk, who warned that the Ankara-Brussels migration deal "would be a catastrophe".

"I couldn't believe it was true. These were my closest partners", Tusk said, referring to Merkel and Dutch Prime Minister Mark Rutte, who sat down with then-Turkish Prime Minister Ahmet Davutoglu, ahead of the 2016 EU summit in Brussels.

The Inside Europe: Ten Years of Turmoil documentary revealed that Merkel and Rutte had agreed on almost all items of Davutoglu's wishlist, citing Davutoglu as saying that he "regarded it as a win-win deal".

"My reaction was: 'are you kidding'?" Tusk told documentary makers, while former Italian Prime Minister Matteo Renzi claimed that meeting "with Mark and Angela without Donald was a mistake".

In March 2016, the EU and Turkey clinched a deal which stipulated that Syrian refugees arriving in Greece would be returned to Turkey if their claim for asylum is rejected, while Syrian asylum seekers in Turkey would be resettled in Europe on a one-for-one basis.

In return, Ankara received $6.4 billion in financial aid and major concessions on EU membership and travel.

The EU, in particular, vowed to accelerate the Turkish EU accession bid, introduce a visa-free regime, as well as provide financial aid to Turkey to cover the costs associated with migrant reception.

The agreement resulted in the decrease of new migrants arriving in Europe, but at the same time, it prompted thousands of refugees to resort to unsafe routes operated by smugglers.

‘Massive Backsliding’: Turkey Bid to Join EU Bloc Doomed Says New Evaluation
In 2018, the German magazine Spiegel reported that the deal is on the edge of collapse, as Germany, as well as some EU members, ave denied further payments to Turkey as part of the Ankara-Brussels agreement.