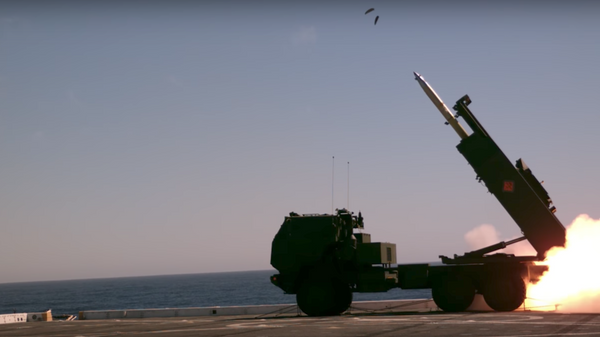 The US State Department approved the sale of 20 High Mobility Artillery Rocket System Launchers (HIMARS) and associated support equipment to Poland last week, with the deal worth an estimated $414 million.

Polish Prime Minister Mateusz Morawiecki and Defence Minister Mariusz Blaszczak have made a joint formal announcement on Warsaw's intent to buy the US weapons system on Sunday afternoon, the Polish Defence Ministry announced on its official website.

Speaking at a ceremony in Warsaw, Defence Minister Blaszczak said that the purchase of the US-made system will be formalised on Wednesday, with the "modern equipment" helping to "guarantee" Poland's security.

"Minister @mblaszczak: On Wednesday we will sign a contract for the delivery of a HIMARS battalion. It's modern equipment that guarantees us security."

"This is an extremely important component in the implementation of the modernisation program of the Polish Armed Forces. Together with rocket launchers, Poland will receive munitions, as well as a package of logistics and training," the Defence Ministry said in a statement.

US-Polish Conference on Middle East Aims to Divide Europeans - Tehran
Produced by Lockheed Martin and BAE Systems, the M142 HIMARs is capable of launching both rocket artillery and tactical ballistic missiles, and has an estimated operational range of 480 km. Poland is one of just a handful of countries to be approved the system. Along with the US Army and Marine Corps, HIMARS are presently operated by the United Arab Emirates, Jordan and Singapore.

Tensions between neighbours Poland and Russia have escalated in recent years over the crisis in Ukraine, NATO's expansion and the US deployment of components of its missile defence shield on Polish territory. The Western alliance has considerably expanded its presence in Poland and the Baltic states along Russia's borders while accusing Moscow of aggressively maneuvering its forces inside Russian territory. Last year, Warsaw announced that it would lobby for the creation of a US military base on Polish territory, dubbing the proposed base 'Fort Trump'.