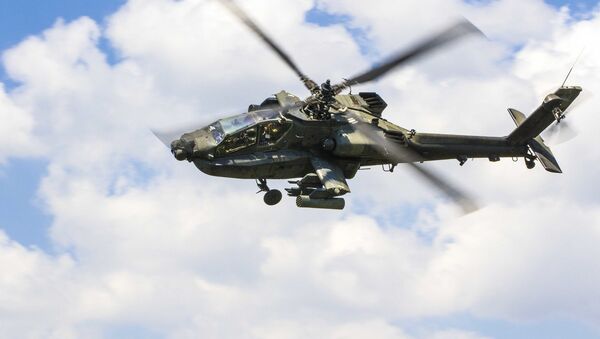 British Army Air Corps AH-64 Apache attack helicopters have been deployed to the Arctic Circle for the first time, according to The Sun.

The tabloid referred to this week's live fire drills in Norway involving the UK army's Apache choppers, which Brigadier Mike Keating, operations officer for Joint Helicopter Command, said were "sending a message to a whole range of adversaries".

The Apache deployment's goal is to strengthen NATO's Northern flank amid what The Sun described as Russia's push for "control of the [Arctic] region".

The developments come after UK Defence Minister Gavin Williamson unveiled in late September the country’s new Defence Arctic Strategy, urging the British army to be ready "to deal with all threats as they emerge".

He underscored the significance of the High North and Arctic region, pointing the finger at Russia, which he claimed is "staking a claim and militarising the region".

Earlier, the British Defence Ministry said that the country's Arctic strategy specifically stipulates that the UK Marines would continue undergoing joint training with their Norwegian counterparts on a long-term basis.

Russia Reportedly Deploys Deep-Sea Division in the Arctic
As part of the strategy, four RAF Typhoons will start patrolling skies of Iceland in 2019, which is expected to help deter aerial threats to the Euro-Atlantic security, according to the ministry.

London repeatedly expressed concerns over Russia's alleged increasing military presence and activities in the Arctic region, and voiced fears that navigation in the Arctic could be limited.