Whose Side Are You On – Trump or Maduro? Darkness or Democracy? 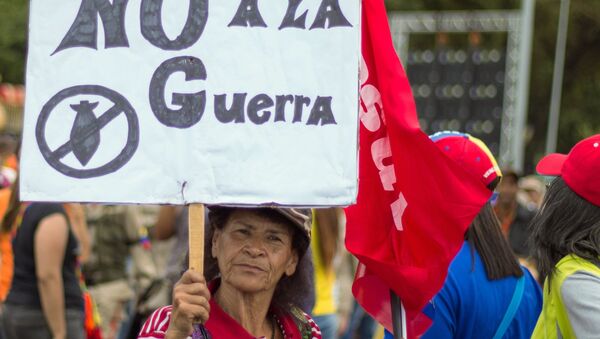 Tommy Sheridan
All materials
Politics is about taking sides. Those who seek to sit on fences in the midst of important political struggles and events end up with nothing more than cowardly reputations and very sore arses.

In respect of the current Trump inspired and organised attempted coup de'etat in Venezuela it is illegal under international law, illegitimate under any democratic measure and immoral politically. Trump represents darkness. Maduro represents democracy.

Venezuela is a democratic country with a highly motivated electorate empowered by the Chavista movement from 1998 against the powerful and very rich elites in Venezuela who for several decades had ran the country as their personal paradise with ownership of businesses, newspapers, television companies and the oil company providing the minority with incredible comfort, wealth and power while almost 20% of the population struggled to survive in extreme poverty and 45% lived in general poverty. In a country with the largest oil reserves in the planet, such statistics were shameful and, to many, unacceptable.

Bolivia Not Supporting Montevideo Declaration on Venezuela
Hugo Chavez raged against the neo-liberal economic consensus of Venezuela and the West which dictated private ownership of the economy and grotesque inequalities of wealth were the natural order. He promised to change Venezuela for the better if he was elected in 1998 by introducing radical wealth redistribution measures and challenging the powerful to give up their unfair and unearned privileges and positions. The Venezuelan elites hated him with a vengeance but the people loved him and bought into his Bolivarian socialist revolution.

Not only was Chavez elected against the odds he was re-elected and involved the country in a mass re-writing of the Venezuelan constitution to recognise rights to education, health, housing and jobs, all things the elites had ignored for years. From 1998, according to the National Electoral Council in Venezuela, the proportion of the adult population registered to vote rose from 80% to 95% in 2011. The adult voting population rose from 12 million in 2003 to 19 million by 2012. Extreme poverty and general poverty was cut in half, millions on new homes were built, healthcare was made available to everyone and illiteracy was abolished through improved education.

Time for Dialogue With Maduro 'Has Long Passed' - US Envoy to Venezuela
This is an important context to recent events and ultimatums issued by other countries to the sovereign nation of Venezuela. Much is made of the election of Nicolas Maduro for a second six-year term in office last May 2018. It was ‘illegitimate' according to America and the puppet Western press and media who in the last two weeks have become little more than propaganda outlets for Donald Trump and his desire to overthrow the elected socialist government in Venezuela. The right wing and elites in Venezuela had called for a ‘boycott' of the election so the outcome should not be recognised is the mantra of the billionaire press.

Yet 46% of the adult voting population ignored the well-financed boycott campaign and went to the polls. Just over 6.2 million Venezuelans cast their vote for Nicolas Maduro. Two opposition candidates who also ignored the boycott call secured 1.9 million and 983,000 votes respectively. Maduro won 67.8% of the votes cast which equates to 31.7% of the eligible voting population.  That is far from an illegitimate mandate.

Venezuela Humanitarian Aid: 'Noble Gesture' or Demonstration of Strength?
In fact, let's examine Donald ‘Troublemaker' Trump and his electoral mandate of 2016. He won 63 million votes from a potential voting population of 209 million, 46% of the votes cast. His nearest challenger won 3 million more votes and 48% of the votes cast. So in both voting number terms and percentage of the votes cast Trump lost the 2016 Presidential election. However, as a percentage of the eligible voting population as a whole Trump won the support of only 30% of registered voters in America compared to the 31.7% of the eligible voting population won by Maduro in Venezuela. Maduro's democratic legitimacy is greater than Donald Trump's and not a single Western newspaper or media outlet has reported that fact.

What's at Stake in Venezuela is the 'Concept and Essence of Democracy' – Scholar
So Nicolas Maduro has a greater democratic mandate than the Presidents of the U.S., Argentina, Chile and Colombia who have called for him to stand down in favour of the mysterious Juan Guaido, a former Rothschild Merchant banker who declared himself President at a rally in Caracas on January 23rd and was magically recognised as the legitimate President of the country by Donald Trump within a matter of hours.

Yet if you watched, listened to and read the Western press and media over the last two weeks, not one station or outlet has made that obvious and crucial point. Juan Guido is a puppet of American imperialism, nothing more and nothing less.

Venezuela’s Guaido Appeals to Pope for Help After Similar Call by Maduro
As for the ‘human rights' flag of convenience flown by Trump in support of regime change in Venezuela and parroted like obedient dogs and useful idiots by the BBC, ITV, Channel 4 and the mainstream media it is stomach-churningly hypocritical. The U.S. and Trump are concerned for human rights abuses? Aye right, and my flowing locks of hair from 20 years ago are growing back on my scalp!!! What cruel and utter garbage.

US Admiral Says Military Ready to Protect US Personnel in Venezuela if Necessary
America turns a blind eye and is therefore complicit in horrendous human rights abuses in Saudi Arabia but they are targeting Venezuela for regime change not because of democratic concerns or human rights concerns but because they want to control Venezuela's vast oil reserves, the largest on the planet.

Music to the ears of U.S. oil giants Exxon Mobil, Chevron Corporation, Occidental Petroleum and others, the real rulers of America. Despite the chorus of approval from the mainstream press and media for the undemocratic ousting of Nicolas Maduro every socialist, trade unionist and democrat on the planet should be prepared to take the side of those opposing American imperialism.

Mexico Worried About Possible US Military Intervention in Venezuela - FM
Now is not the time for critiques of economic strategies which overly rely on oil production and sales. The Maduro government have suffered from U.S. economic sanctions and currency controls because they were over-reliant on oil revenue so when the price of oil crashed in 2015 so did the Venezuelan economy. These problems are for the Venezuelans to sort out not a country with already 56 military interventions against socialist and radical governments in Latin and South America alone.

The Charter of the United Nations is clearly being abused by the U.S. and other nations in their recognition of an unelected and therefore wholly illegitimate individual as the President of Venezuela. Article 2.7 is clear:

7. Nothing contained in the present Charter shall authorize the United Nations to intervene in matters which are essentially within the domestic jurisdiction of any state or shall require the Members to submit such matters to settlement under the present Charter.

If Montevideo Summit Fails, Military Clash in Venezuela Possible - Uruguayan MP
There is no legal authority for what the U.S. and other nations have done. It is therefore illegal and flouts the rule of international law. Why has the mainstream media not highlighted that fact either? Imagine Cuba, Russia, Bolivia, Nicaragua or another nation not part of the neo-liberal economic consensus interfered in a sovereign country's affairs the way the U.S. has done in Venezuela? There would be an international outcry and lecture after lecture about the importance of the rule of law and respecting the United Nations Charter. But the biggest rogue nation in the world, the one which flouts international law regularly, is, of course, the United States of America.

The current situation in Venezuela is very volatile. Maduro has the backing of at least 6.2 million voters and the majority of the army. America has sent 5,000 troops to Colombia which borders Venezuela. That is an act of provocation and aggression but Maduro and his supporters are refusing to be cowered or bullied by U.S. sponsored threats and troop movements. They are standing firm and have the support of many countries which is steadfastly ignored by the biased media. Not just Russia, China, Turkey and Iran but Mexico, Bolivia, Nicaragua and many others refuse to join the illegal U.S. bandwagon.

The Tories have typically sided with Trump but I am disappointed so far not to hear strong condemnation of U.S. actions from the SNP in Scotland. If they side with Trump on this issue they will abandon the rule of law in international affairs and line up beside a dangerous tyrant in the shape of Trump. They must make a stand for democracy, the rule of law and sovereignty of nations by recognising Nicolas Maduro as the legitimate and democratically elected President of Venezuela.

000000
Popular comments
I love your column Tommy but I have a bone to pick with you. "Venezuela doesn't execute political dissidents; Saudi Arabia does including women and children." I could understand you drawing extra attention to children being killed but not women as well. This implies that killing men is not as bad as killing women and that killing women is as bad as killing children. It is not the 19th century anymore.
ian
8 February 2019, 16:51 GMT1
000000
The U.S. wants us to believe that "the end justifies the means". If the end is peace and prosperity, then overthrowing the popular elected government is justified -- and, more than that, is the only possible means to the end! This argument is obviously specious, but that does not prevent all of the U.S. vassals from parroting it! What a zombie chorus! To see even more clearly just how absurd the U.S. argument is, imagine that the country is a patient suffering from an economic anemia and needs to find a doctor. The first doctor Mr. Ven sees, Dr. Putin, advises him to take vitamins, improve his diet, and get his blood tested. The second doctor, Dr. Bolton, tells Ven that the one and only cure is to cut off his head and attach a new head. Dr. Bolton then pulls out a scalpel that looks a lot like a machete, seizes Ven's wallet, and tries to prevent Ven from leaving the office. The patient escapes, returns home, and looks up the success rate for the head-transplant operation. Wikipedia assures him that it is "100%". Suspicious, Ven consults Wikipedia's edit history and finds that the "100%" figure is the product of a recent edit -- up from 0%. Seriously, now, the very fact that the U.S. has no advice to offer apart from the demand that Venezuela cut off its head should set our alarm bells ringing.