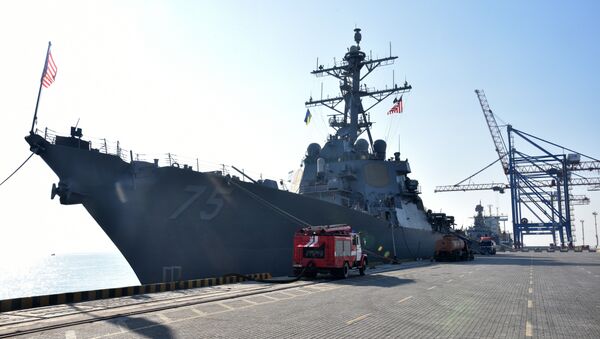 Washington has sent several ships to the Black Sea following an incident in the Kerch Strait, when Russian border patrol boats forcibly stopped several Ukrainian military vessels that had violated the Russian maritime border and refused to follow the patrol's orders.

The commander of the US Navy, Admiral John Michael Richardson, has come up with an unexpected suggestion in terms of proactive measures to counter Russia in the Mediterranean and Black Sea, Newsweek reported. When asked at the Atlantic Council in Washington on 6 February about the strategy against "perceived aggressions" from Russia, Richardson reportedly suggested that instead of responding to Moscow's actions, the US should actually "push first" in a number of areas.

"It would be great if we could get folks, Russians, some of these competitors to respond to our first move", the admiral said.

Richardson also reportedly noted that the US would gain an advantage by "playing the white side of the board" and thus making the first move. It's unclear whether the Atlantic Council will take his suggestions into consideration.

The council is a US think tank working for NATO and hosting a discussion platform for politicians, experts and members of the military.

The admiral's words come amid an increasing US military presence in the Black Sea. Following the Kerch incident between Russian and Ukrainian ships, Washington in January deployed the missile destroyer USS Donald Cook to the region.

READ MORE: I See What You Did There: PHOTOS of US Warship Sent to Black Sea Surface Online

The Russian national defence control centre vowed to monitor the USS Donald Cook's movements and noted that Russian ships would act in a "professional" manner when interacting with their American counterpart.

On 25 November 2018, three ships of the Ukrainian Navy breached the Russian maritime border, entered Russian territorial waters that were temporarily closed, and began moving toward the Kerch Strait, which serves as the entrance to the Azov Sea. The Ukrainian vessels were forcibly stopped by Russian ships, and their crew was detained by Russian authorities after failing to respond to a lawful demand to stop.