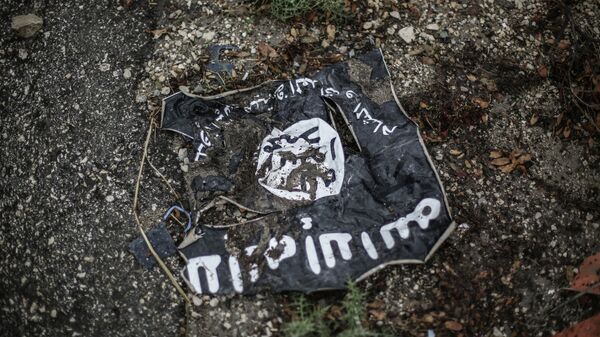 © Sputnik / Andrey Stenin
/
Go to the photo bank
Subscribe
In a move to distinguish Saudi jihadists from other foreign fighters who've been recruited by the Daesh terror group, a new 40-page study published in part by the King Faisal Center for Research and Islamic Studies found that recruits were educated, and weren't "socially loners and outcasts."

The study, which was published on Tuesday, reviewed leaked documents from the terror group in 2016 that included an overview of 759 Saudi recruits who joined the terror group between 2013 and 2014.

"By analysing [Daesh's] own records and focusing on those pertaining to individuals hailing from a country that has always been targeted and regarded as the ultimate prize for terrorist groups and organisations (namely Saudi Arabia), this study represents an important step in increasing contextual knowledge," the report states.

"Such knowledge is vital when dealing with a phenomenon as intricate as terrorism and a process as complex as radicalisation."

Recruitment documents included a set of 23 fields for applicants to answer, which the study noted were not all filled in. Interested parties were asked to provide their name, blood type, marital status, educational qualifications, prior employment, travel history, name of recommenders, speciality, level of religious knowledge, point of entry into Syria and past jihadi experience, among other data.

Although most of the Saudi recruits were young, they weren't primarily teenagers and adolescents. Half of the recruits in the sampling were between the ages of 20 and 24, and 22 percent were between 25 and 29. The youngest recruit clocked in at nine years of age, and the oldest was born in 1958, suggesting he was either 55 or 56 when he joined the group.

Seventy-three percent of the applicants were single, and 18 percent were married, of which 68 percent had children. The majority of the recruits had just one or two kids. One individual jotted down that they had eight children back home.

Having been given the option to indicate whether they had basic, intermediate or advanced knowledge of Islam, 58 percent of the Saudi recruits reported having basic knowledge. As Saudi students are given religious education courses from elementary to high school, according to the report, a basic knowledge of Islam could seemingly be assumed in anyone with even a low-level education.

Thirty-four percent indicated they had an intermediate knowledge of Islam, while another 8 percent claimed advanced knowledge.

Researchers found that unlike European recruits, who have tended to be either high school dropouts or unemployed, Saudi recruits held jobs as religious police, imams and soldiers for the Saudi military, among other positions. Only 15 percent were unemployed.

Of the 759 recruits, 337 (44 percent) had a high-school level of education, and 119 (15 percent) had obtained a bachelor's degree. Five individuals had either a master's or doctoral degree. Only 150 (19 percent) of the recruits were dropouts.

"This data demonstrates that the Saudi contingent does not consist of educational underachievers, which can lead to the argument that they were not lacking in socio-economic opportunities," the report states.

"In fact, this group was, on average, better educated than the general Saudi labour force."

"The second observation is that the majority of fighters that dropped out evidently did so in order to make their way to Syria. We may infer that they believed strongly in the cause and were frustrated enough to risk their future by dropping out of college to join the fight in a foreign conflict-torn land," the study explained.

Additionally, the majority of the recruits (625) volunteered to join the terror group as fighters. Just 71 signed up to be suicide bombers, and only 44 volunteered for inghimasi operations, otherwise known as a kamikaze attackers. The report explains that "inghimasi operations are distinct from suicide bombings in the sense that ‘their success does not necessitate the perpetrators' death."

Although the largest number of Saudi recruits came from Riyadh, the highest ratio of recruits per the region's population came from the province of Qassim, just north of the country's capital. It's suggested in the report that the number of recruits from Qassim was a result of a spike in the presence of terrorist groups in the province.

000000
Popular comments
It doesn't say much about King Salmonella of Saudi Arabia when many Saudi recruits end up joining terrorist organisations , one of the worst being DAESH . I am not surprised in the least that the guy who walked into the Saudi embassy was dismembered or cut up into pieces , to be more accurate . And the King's effort in Yemen , the genocide that took place was spectacular , not to mention the thousands of children who were bombed in the classroom . Either bombed in class or starved to death when sea ports were shut down unable to deliver supplies to the Yemini . The US certainly knows how to pick a loyal ally , wouldn't you say .