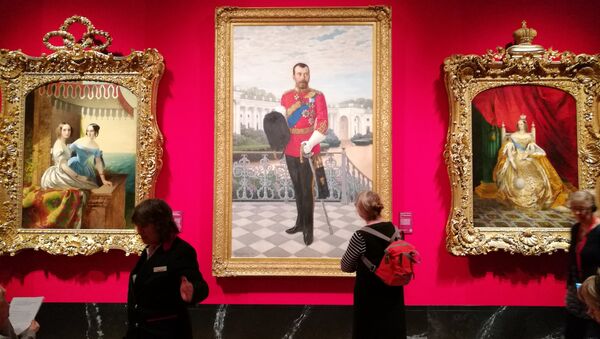 The exhibition features extensive diplomatic, familial, and historical ties between Britain and Russia's royal houses over three centuries, beginning with Peter the Great's visit to Britain in 1698, and is the first of its kind from the Royal Collection to explore such links.

Sputnik spoke to Stephen Patterson, co-curator of the 'Russia, Royalty & the Romanovs' exhibition and Sophie Gordon, head of photographs and curator of 'Shadows of War: Roger Fenton's Photographs of the Crimea, 1855' display to get an inside look at the gallery, which is on display until 28 April.

"Income generated from admissions and associated commercial activities" directly funds the Trust, the spokeswoman said, which is a "registered charity whose aims are the care and conservation of the Royal Collection as well as promotion of access and enjoyment through exhibitions, publications, loans and educational programmes".

The spokeswoman stressed that the Trust undertakes work "without public funding of any kind" and is trusted by the Sovereign for "her successors and the nation", and that The Queen does not own the works as a private individual.

The spokeswoman explained that the Royal Collection is one of the "largest and most important art collections in the world, and one of the last great European royal collections to remain intact", which comprises nearly "all aspects of the fine and decorative arts" spread amongst roughly fifteen royal residences and former residences across the UK, with most of them regularly open to the public. 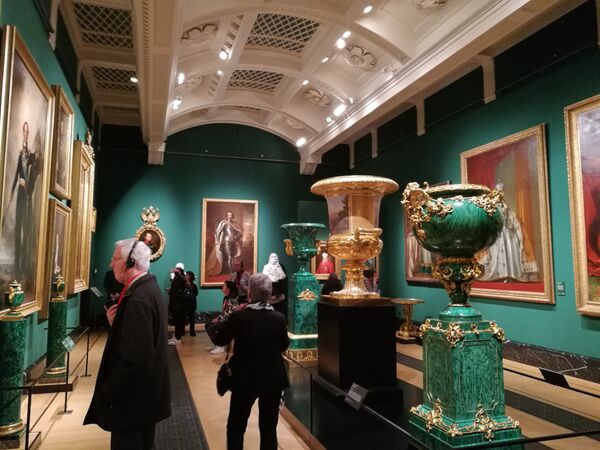 An interior shot of the Queen's Gallery display of 'Russia, Royalty & the Romanovs".
© Sputnik / Demond Cureton

The Vision for 'Russia, Royalty and the Romanovs' and 'Shadows of War: Roger Fenton's Photographs of the Crimea' "At The Queen's Galleries in London and Edinburgh, aspects of the Collection are displayed in a programme of temporary exhibitions," she said. "Many works from the Collection are on long-term loan to institutions throughout the UK, and short-term loans are frequently made to exhibitions around the world as part of a commitment to public access and to show them in new contexts."

"The aim of 'Russia: Royalty and the Romanovs' is to present 300 years of history and connections between Russia, Great Britain and their royal and imperial families through the diverse range of art and archives in the Royal Collection," co-curator Stephen Patterson told Sputnik. "The three themes of the exhibition — diplomacy, alliances and family — have all enriched the Royal Collection", he said, adding that the unprecedented exhibition allowed many works associated with Russia "to be shown for the first time at The Queen's Gallery".

Mr. Patterson explained that the display begins with Peter I's first visit to England in 1698 as the guest of William III, also known as William of Orange, which includes Sir Godfrey Kneller's portrait of the Tsar, "which Peter gave to William" as a gift.

"The exhibition continues with contact between Catherine II and Britain in the mid-eighteenth century and the later alliances between the two countries at the time of the Napoleonic wars," Mr. Patterson added.

"This moment of alliance is commemorated with the inclusion of four paintings from the Waterloo Chamber in Windsor Castle of Russian generals and statesmen," he said. Political and dynastic alliances were recorded with works of art "connected to the marriage of Alfred, Duke of Edinburgh to Grand Duchess Maria Alexandrovna in 1874, the only direct dynastic marriage between the House of Romanov and the British Royal Family, and the marriage of Emperor Nicholas II to Princess Alix of Hesse in 1894 and subsequent meetings of the Russian rulers and their British cousins before the [Bolshevik] Revolutions of 1917." 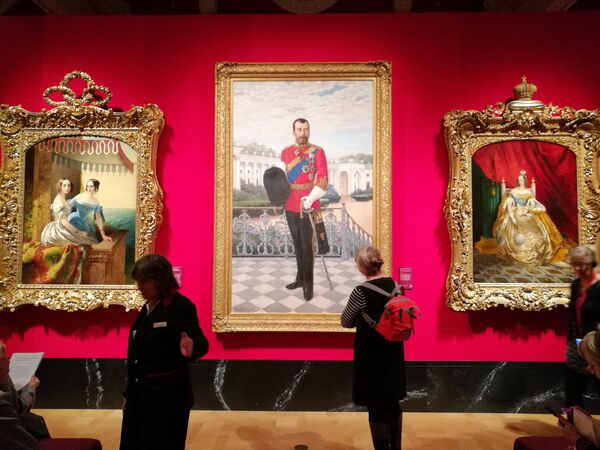 A painting of Tsar Nicholas II is displayed at the 'Russia, Royalty & the Romanovs' Exhibition at The Queen's Gallery in London, UK
© Sputnik / Demond Cureton

She explained that research on the photographs had "uncovered new information about Roger Fenton's commission, and linked it closely to the art world of 1850s Britain, focussing on public display and the memory of the war in the Victorian public consciousness".Roger Fenton's Crimean War photography exhibition was "designed to show an exceptional part of the photograph collection, which has not previously been exhibited," head of photographs and curator Sophia Gordon told Sputnik.

Mr. Patterson explained that the exhibition "focusses on key visits to Britain by Russian and Soviet rulers and their gifts", with particular attention made to visits from "Peter I in 1698, Nicholas I in 1844, Alexander II in 1874, Nicholas II in 1896 and 1909 and the visit of Khrushchev and Bulganin in 1956".

"The exhibition also includes the gift of the Patriarch of Moscow to Her Majesty when he was received by The Queen at Buckingham Palace in 2016," Mr. Patterson said.

The Trust believes that Roger Fenton's photographs were likely "purchased by Queen Victoria or Prince Albert for their son, the Prince of Wales, also known as the future Edward VII, who reigned from 1901 to 1910," Ms. Gordon added.

— RoyalCollectionTrust (@RCT) January 16, 2019"In the 1850s, the Royal family were all very interested in the progress of the war, and at the same time were exploring the new medium of photography," she said. "Fenton's photographs were exceptionally popular when displayed in London from 1855 to 1856, so it is most likely that the photographs were purchased then and given to the young Prince of Wales as a gift."

Mr. Patterson said that Royal Collection Trust curators and conservators work closely with colleagues "in a number of museums and archives in Russia, particularly in Moscow and St Petersburg" to prepare the exhibit and write the accompanying catalogue.

For more information, please visit https://www.rct.uk/. "These close contacts have enriched our knowledge and understanding of pieces in the exhibition and provided new information on a number of works on display," Mr. Patterson added.