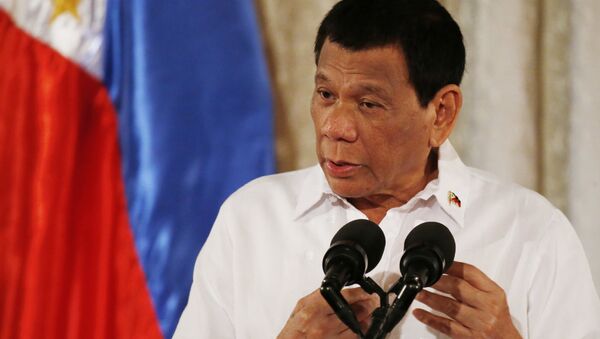 © AP Photo / Bullit Marquez
Subscribe
The president of the Philippines, known for his controversial statements, previously urged the army to just come and talk to him if they want him to resign, instead of organising a full scale coup.

Philippines President Rodrigo Duterte has come up with an unexpected lecture for newly sworn-in army servicemen — he advised them to "drop all politicians" in case of a coup, including himself, and allow "young blood" to take over instead.

"Drop all politicians, including me. I can always go home to Davao swimming", he said.

But Duterte also suggested the military should treat the "young leaders" with the carrot and stick approach. Namely, he advised the servicemen to kill them if they "f**ked up" and raise their salary each year if they "did good".

This is not the first time Duterte has told newly sworn-in troops how to conduct coups, even if they are directed against him. In September 2018, he told new recruits that if they wanted to oust him they could just come and explain to him their plan for governing the country. He added that if he likes it, he will simply step down.

"I said if you do it, do not do it with a melodramatic thing. Do not bring your armour there outside. You just can call me, we will have coffee and I think if I like your strategy, your plan, you can have it", he said back then.

Around the same time, Duterte announced that a friendly state, which he didn't name, had tipped him off about plans by Communists, opposition politicians, and several servicemen to stage a coup to oust him.