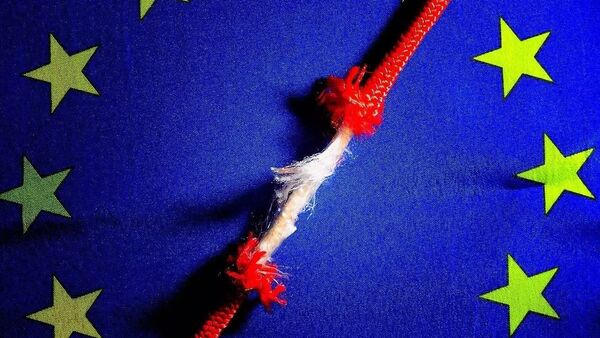 CC0 / /
Subscribe
Egor Efimchik
All materials
The Maastricht Treaty, signed 27 years ago, marked the first step towards the establishment of the European Union (EU) as we know it now. The ambitious project, which was set to align its members closer with each other, has since fallen victim to the political and economic turbulence of the past decade.

The EU owes its name to the Maastricht Treaty, formally known as the Treaty on European Union, which was signed on 7 February 1992 by 12 countries. They dropped the word "economic" from the EU's predecessor, the European Economic Community, in search of political, rather than simply economic integration.

The epoch-making document created the European Central Bank, which prints the single European currency, and paved the way for closer cooperation between member states in foreign and security policy, as well as justice and home affairs.

EU States No Longer as Safe as Before – UK Journo Katie Hopkins
While the initial success saw the bloc more than double its membership to 28 states by the time the EU officially became "of age", it was the global economic meltdown of 2009 that finally exposed the deep underlying shortcomings of the "United States of Europe" concept. In the meantime, the Arab Spring turmoil and its lasting aftershocks spilled over into Europe's ongoing migration crisis, making the United Kingdom the first EU state set to leave the bloc in 2019, allowing for critical voices within the union to grow stronger.

"The Maastricht Treaty was the beginning of the end of the nation-state in Europe, but was the delight of big business, the Euro-bureaucracy in Brussels and the Berlin-Paris axis, who thought they could rule the whole of Europe through that bureaucracy without democratic accountability", academic and political commentator Rodney Atkinson told Sputnik. "Many EU leaders boasted that they could never have achieved this 'country called Europe' by democratic means".

"I don't think the EU can be reformed. It has a massive democratic deficit — deliberately since otherwise the bureaucracy could not have built this Europe with failures which within democratic nations would not have been tolerated by free people and politicians accountable to them".

Is the Euro a Lost Cause?

Six years after the Maastricht Treaty took effect in 1993, EU member states established the Eurozone and adopted the single currency.

Given that the euro is a fiat currency — which means that is backed not by a physical commodity, but by the government that issues it, just like the US dollar — some observers say that it doesn't have a value in itself and is doomed to collapse.

Atkinson, who has authored two books on the EU's foundation and governance, "And into the Fire" and "Treason at Maastricht — The Destruction of the Nation State", brands the euro "the most economically and democratically destructive policy in the EU".

He notes that it is hard to leave the Eurozone for economic reasons, citing the devastating effects of financial instability in Spain and Greece. His forecast for the single European currency is all but optimistic. "The euro will collapse like other currency unions, but it is difficult to see when the suffering and inequality will reach such levels that revolutionary politics will force national governments to leave".

"The euro suffers from economic and ethical deficiencies: for instance, it loses its purchasing power over time, it causes an arbitrary redistribution of income and wealth among people, it causes boom and bust cycles", says Dr Thorsten Polleit, an economic adviser to the P&R Real Value fund.

According to him, the decreasing role of national governments is the same problem for the monetary policy as for European politics.

"The monetary policy of the European Central Bank de facto amounts to a great redistribution of income and wealth among people within and among nation states — without explicit approval of national parliaments".

He insists that the cost of "rescuing" the euro by means of printing new money will get higher with time, inevitably raising the likelihood of people in some countries seeking departure from the Eurozone.

"To cut a long story short: I would think that the survival of the euro in its current composition is by no means a done deal".

Giving Up Sovereignty to Brussels

This comes on top of what he described as the growing corruption of the integration project. "Nowadays the underlying idea driving many nation states' governments and bureaucrats is to form something like 'The United States of Europe', increasingly centralising political powers in Brussels".

"In fact, one has to fear that it will cause ever greater conflicts — within nation states as well as among them", he warns, stressing that the only way to save the EU is to "scale it back" into a free trade area made up of fully sovereign nation-states.

On the other hand, Theodora Kostakopoulou, who sits on the Scientific Committee of the European Union Agency for Fundamental Rights (FRA), believes that the bloc's shortcomings are mainly connected with power struggles and can be fixed through further reforms.

"We should not forget that the EU has not had a long history and that its imperfections have much to do with the power games its member states and their national executives play. Initially, the member states did not wish to have a democratic European Union which would promote accountability, respect for the rule of law and fundamental rights", she said in a written comment.

According to Dr Michael J. Geary, associate professor of Modern History at the Norwegian University of Science and Technology, although all member states have generally benefited from the single market, the likes of Italy, Portugal, Spain and Greece — some of the most troubled EU economies that have suffered from austerity measures imposed by Brussels — should not have joined the euro without being subject to proper political oversight.

"On the monetary side of the Maastricht EMU (Economic and Monetary Union), certainly we've seen a lot of disadvantages, because countries could no longer devalue their currencies in the Eurozone and they had to accept rules from Brussels which have been difficult for some", he said in an interview with Sputnik.

It is also difficult for EU member states to maintain balance when it comes to expressing political views on a wide-ranging agenda. While smaller countries like Luxembourg and Belgium, he says, are fine with more power being concentrated in the centre because it weakens the voice of bigger states, EU members like the UK have not been happy with losing influence.

"There's a lot of soft power there that you have as part of that wider organisation. But the negatives are to be in an organisation such as the European Union — and it's a unique organisation in that respect — you have to give up national sovereignty for central decision-making. And there's a tension; that tension has been there since the 1960s. For some countries, they accepted it; for others, like Britain, it's been a harder pill to swallow in terms of giving up their sovereignty from Westminster to Brussels".

000000
Popular comments
Maastricht treaty the biggest con job by those freeloaders in Brussels. They had to vote 3 or 4 time before it would pass all the previous times it got rejected by the European people. So much for a free and democratic vote. What a F up