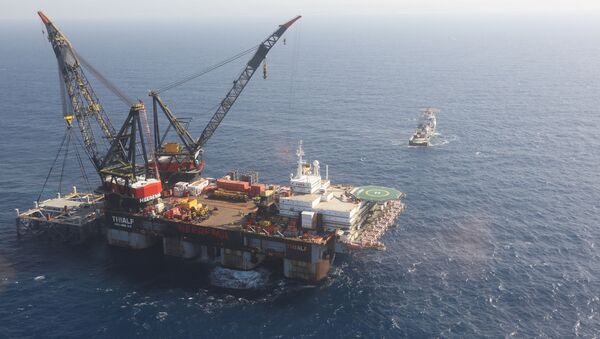 A particular part of a nearby sea shelf, called Block 9, has been a source of tension between Israel and Lebanon since the 2000s, as both states claim that the area falls within their Exclusive Economic Zone (EEZ).

Speaker of the Lebanese Parliament Nabih Berri has accused Israel of violating Lebanon's sovereignty by licencing companies to drill in a maritime region adjacent to the disputed Block 9, for gas and oil, Reuters reported. Berri called the move by Tel Aviv "a dangerous matter".

"Israel has licensed and exploited an area adjacent to the Lebanese southern maritime borders. This is an infringement on Lebanese sovereignty and targets our oil wealth and waters", he said.

The parliamentary speaker also vowed to raise the issue during the upcoming visit of Italy's Prime Minister Giuseppe Conte this week.

Another lawmaker, Ali Bazzi, noted that unlike Israel, firms working on the Lebanese side are staying away from the disputed sector when drilling for energy resources. At the same time, Lebanon has included the disputed Block 9 in a contract with a consortium of energy companies, including Total, Eni and Novatek, but they have so far refrained from drilling anywhere close to the disputed area of the waters.

This is not the first time that Israel has been accused of violating Lebanon's sovereignty. Lebanese authorities have on multiple occasions accused Israeli aircraft, including jets and drones, of violating the country's airspace.