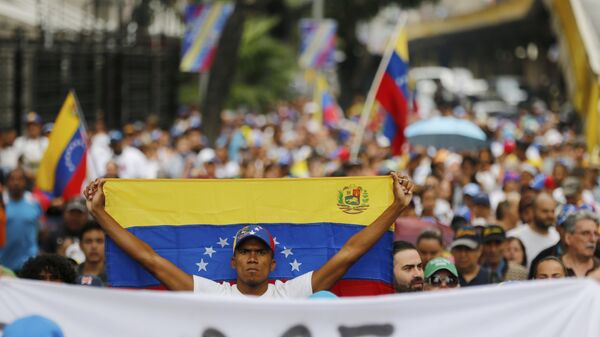 © AP Photo / Fernando Llano
Subscribe
International
India
Africa
With the EU and US vultures well and truly circling the Maduro regime in Venezuela; it seems that now Canada and the so-called Lima group of Latin American nations are joining in for good measure, signalling their support for opposition leader Juan Guaido. Sputnik spoke about it with Journalist Ollie Richardson.

Sputnik: Why are EU and US backing opposition leader Juan Guaido?

Portugal's Novo Banco Halts Transfer of Venezuelan Gov't Funds - Official
Ollie Richardson: I think America knows very well that Maduro is the legitimate president, but unfortunately America has financial problems at the moment and is also lacking in resources.

Venezuela is the number one country in terms of reserves of crude oil; more than Saudi Arabia in fact, so perhaps the fact that countries like Canada, Britain, France and Spain recognise Juan Guaido as the interim president, is connected more to raw materials and economic factors, rather than anything connected to democracy or any subjective concept such as that.

Sputnik: Could the US intervene militarily in Venezuela?

Scholars: US Using Venezuela Crisis to Thwart China's Influence in Latin America
Ollie Richardson: We have to have an open mind in terms of what may or may not happen because we are all human beings, and not robots, so everything is possible.
We have to remember that Russia has invested a lot of money in Venezuela; as has China, especially in the oil exploration domain and it also has strategic ties with Venezuela, in terms of military co-operation, and at the moment Russia is assisting Venezuela in reforming its economy.

I don't think for the US, that it's as simple as just sending troops over the border, or even using Colombian proxies, because the consequences of such a decision would shake the global economy so much so, that America would be shooting itself in the foot.