Viktor Orban and His Chinese Turn: Economic Benefits or “to Spite Brussels”? 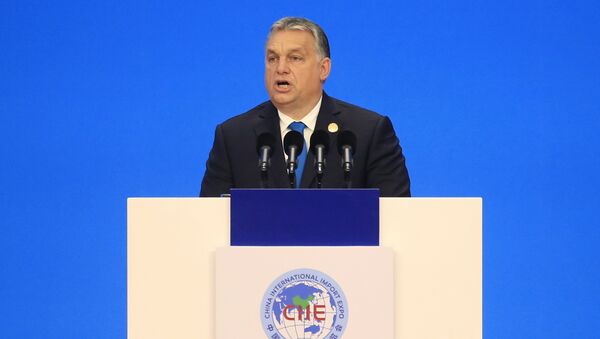 © AP Photo / Aly Song/Pool Photo via AP
Subscribe
The Visegrád Group, having the same opinion on many issues, in recent times are not always united. One of the reasons for their discrepancies is the situation with the Chinese concern Huawei, whose image is actively discredited in Europe by the United States.

If Poland and the Czech Republic are ready to abandon Chinese telecommunications services, thus supporting accusation against Beijing of cyber-espionage, Hungary in its relations with China prefers to keep neutrality.

READ MORE: Will Orban Lead Europe in Resisting US Dictates?

Commenting on the recent statement by Prime Minister Viktor Orbán about refusing US requests to increase pressure on China and Russia, Hungarian political scientist Stier Gábor, in an interview with Sputnik, noted that Hungary has been trying to pursue an independent policy in recent years, and many do not like that. "Hungary does not want to participate in the disputes of the great powers and build relations with China or Russia on the instructions of Washington. Orbán understands that politics, especially foreign, is a big bargain. Politicians always try to move to a certain limit, try to understand what point you can reach. Orbán wants Hungary to become more independent in the political space", Stier Gábor said. According to Alexander Stykalin, a leading researcher at the Institute of Slavic and Balkan Studies of the Russian Academy of Sciences (RAS), this statement does not reflect anything new in the position of the Hungarian Prime Minister. "Orbán never gave the slightest reason to consider him a politician acting under the Russian dictate. He needs Russia as a counterbalance to Brussels pressure", Alexander Stykalin noted in the commentary to Sputnik. Moreover, according to the expert, Orbán may be pursuing a policy independent of Russia but only to an extent that his country's dependence on Russian energy resources, plus the need for Russian support while resisting EU pressure, allows him.

EU’s Juncker Slams Hungary’s Orban for Spreading ‘Fake News’
According to Stier Gábor, it is a mistake to think that by talking about independence Hungary hints at a distrust of NATO and a desire to leave the Alliance. "The United States influence is great, this is not disputed in Budapest. But at the same time, Hungary is trying to retreat a step or two in order to preserve and defend its sovereignty in foreign policy and not to do everything according to the instructions of Washington", Stier Gábor said.

The independent policy of some states does not find support not only from Washington but also from the European Union. Of even greater concern is the desire of some members of NATO and the EU to engage in dialogue with "undesirable" countries. As the Hungarian political analyst explained, Hungary does not like what they are doing with Russia, that it is being urged to abandon contacts with Russia. "You can often hear: you don't need to talk to Russia if Washington is not interested, you don't need to talk to China because the United States and China have a falling out", Stier Gábor noted. "Hungary will not respond to such appeals but will try to build conditionally independent policies with Russia and China". There already exist such precedents in Europe. Germany's example is a confirmation of this: it supports Nord Stream II and has good relations with China. "Then why can't we build the Belgrade-Budapest railway with China?" the Hungarian political scientist wondered.

Chinese investment plays an important role in the region. Hungary is the largest centre of Chinese injections in Central and Eastern Europe, where about a third of all investments from this country go. It is sufficient to mention that by 2017, Chinese investments in Hungary have reached 4.1 billion dollars, and about 10 thousand jobs were created. However, according to Stier Gábor, Hungary does not link its financial future directly with China, at least because Chinese investments are still not enough. "If we are reproached for having very close relations with China and this violates the interests of the United States, then why do we not receive Chinese money?" the political scientist asked.

According to Alexander Stykalin, it is difficult to suspect Hungary of a big Chinese dependence: this direction is not paramount for Hungary from foreign policy and external economic points of view. "Orbán mentioning China is a sign that he perfectly understands the role of China in the international arena. So, as we go forward, the more we will have to reckon with the opinion of China on certain issues. But so far, I don't see facts that would speak of Hungary's increasing dependence on China or the intensification of the Chinese direction in Hungarian politics, and therefore the problem of weakening Chinese dependence does not exist", the Russian expert said.

According to Stier Gábor, China, like any country, pursues its own interests, so even within the framework of cooperation, it would be short-sighted to allow Beijing everything: "We talk a lot about cooperation with China and it turns out that everything goes the way China wants". However, in some cases, the interests of the two countries really coincide. An example of this is the railway between Belgrade and Budapest, part of the Silk Road project, or as it is called in China "One Belt, One Road" initiative. The Hungarian part of the Road, which is estimated at $ 1.8 billion, is 85% financed by the Export-Import Bank of China in the form of a 20-year loan at 2.5 per cent interest per annum, the construction is carried out by the Chinese construction company China Railway International Corporation, Ltd. "If we do not have the money to build the infrastructure and the Chinese are building, then, of course, we cooperate. But I would still consistently defend Hungarian interests", said Stier Gábor.

5G is Good but Agriculture is Even Better

Hungarian PM Orban Pledges Support to China's Silk Road
The current situation with the Chinese concern Huawei in Hungary is treated differently than in other countries of the Visegrád Group. Although, as in the case with Poland and the Czech Republic, Huawei there is also actively cooperating on the 5G line, and in general, with the start of its activities in 2005, the company invested $ 1.2 billion in Hungary. "We have a different approach to this issue. Orbán is too pragmatic about Eastern partners so as not to interfere with business. Here, the situation with Huawei is not a problem. Hungary says it will try to build good, pragmatic relations with China", Stier Gábor said. At the same time, the political scientist added that it would be more important to support capital investments in agriculture so that Hungary could have more exports to the East: "When we say that we need to build good relations with eastern countries, it's not just loans or investments. It would be profitable for us to arrange export there. But so far, we have nothing to export, and that's the problem", he noted.

Against this backdrop, financial support from the European Union remains very significant. For comparison, in 2017 as a member of the Eurozone, Hungary received 4.049 billion euros. If investments from the East are important for Hungary not so much economically as politically, then in foreign trade Hungary is 80 per cent dependent on the European Union. "Without this money, the development of Hungary would not exist, in principle. In turn, within the European Union, we depend mainly on Germany. If there were no German investments, if automotive concerns Audi, Mercedes, BMW did not assemble cars in Hungary, then GDP's growth would be 1 per cent less. If there were no other European money, then GDP would have decreased by another 1 per cent. Shortage of these 2 per cents already means stagnation. We are very dependent on Europe", Stier Gábor recalled.

Trump is pleased with Hungarian Democracy

The political scientist has also named one of the painful subjects for Hungary, the still unresolved problem of national minorities in Ukraine. At the same time, he cannot imagine a situation for Hungary would abandon the previously chosen course to protect its national interests in the region. "This is a vital issue. But we have not abandoned our positions. Ukraine, for its part, is doing nothing, moreover, they are now preparing for elections there, and so nothing positive can be expected. Therefore, Hungary is playing a waiting game", Stier Gábor said. At the same time, in his view, it is wrong to accuse Hungary of intentional unwillingness to see Ukraine as a member of NATO. As the political scientist explained, Hungary would not hinder Ukraine's Euro-Atlantic integration if there were other means capable of stopping the infringement of the rights of Hungarian and other minorities in Ukraine. "In this regard, we are asking for help from the United States so that they put pressure on Ukraine, and it began to behave in a European way", Stier Gábor said. "Do not forget that the Hungarian-American relations have improved over the last 12 to 18 months. The new American ambassador in Budapest said that there were no problems with the Hungarian democracy. The United States tried to talk to Budapest. Previously, under President Obama, everything was different".

000000
Popular comments
What are Orban & Hungary up to? Is this ''shift'' for economic benefit or just to spite the EU? Answer: Probably a little of both.