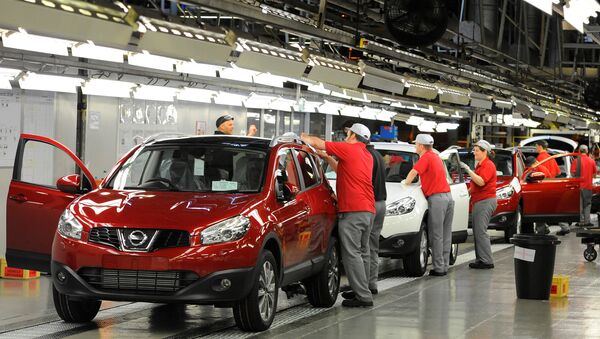 The minister is among those most vehemently opposed to a 'no deal' Brexit in Prime Minister Theresa May’s cabinet.

UK Business Secretary Greg Clark has admitted secret state aid totalling over $100 million was dangled in front of car company Nissan in order to induce the firm to manufacture its new model X-Trail in Sunderland post-Brexit.

In response to pressure from MPs, Clark released a letter dated October 2016 in which he pledged millions in taxpayer support for the Japanese vehicle giant, promising it wouldn't be "adversely affected" after the UK left the EU.

The letter is in stark contrast to claims made at the time by Downing Street that "no special deal" had been offered to Nissan — and Clark himself repeatedly denied a special deal had been offered, telling BBC Question Time he didn't "have a chequebook".

"no question of financial compensation" — Greg Clark Oct 2016 publicly on Nissan decision to build Qashqai and X-Trail in Sunderland.
"As a demonstration of the UK Government’s commitment… a package of support…could amount to..up to £80m" same month in letter to Nissan.

Clark and the government also repeatedly refused to release the letter, despite requests — it was sent by the minister to Nissan's then-chief executive Carlos Ghosn, committed the government to "a package of support in areas such as skills, R&D and innovation" which "could amount to additional support of up to £80 million".

Ghosn was told it was "a critical priority of our negotiation to support UK car manufacturers and ensure their ability to export to and from the EU is not adversely affected by the UK's future relationship with the EU".

Clark has sought to deflect criticism of his handling of the affair by warning a no-deal Brexit "would be ruinous for our prospects" and arguing MPs should support Theresa May's Brexit deal as a result.

"No-deal is fully acknowledged, certainly by me and the industry, as being ruinous for our prospects. In order to avoid no-deal, we need to come to an agreement in this house," he said in parliament.

🚗I asked Greg Clark’s department for the Nissan letter in October 2016.

❌First they ignored then refused my request.

🤐It took them a *year* to tell me there was ‘limited public interest’ in disclosure.

Nissan's car plant in Sunderland employs 7,000 — although it operates on the periphery of a city where 61 percent of residents voted for Brexit in the 2016 referendum.

No-Deal Brexit Risks 'Serious' Consequences for UK Exports - Nissan
However, Nissan has now announced it will no longer manufacture the new model X-Trail SUV in Sunderland with "continued uncertainty" over Brexit a major contributing factor. No jobs were lost as a result, although had the project gone ahead in Sunderland it could've created 741 vacancies.

Clark's letter didn't make specific assurances about future Brexit policy, although he sought to allay any concerns Ghosn may have had about the UK's departure from the EU.

"We will continue to do everything we can to make it as easy and rewarding as possible for Nissan to invest. I understand, of course, your worries now about uncertainties as the UK prepares to leave the EU. In particular, your fear that potential future trade arrangements could affect the business case for your investments," he wrote.

Nissan will now consolidate all X-Trail production at its plant in Kyushu, Japan, with cars manufactured there benefitting from the recently completed free-trade agreement between the EU and Japan, which will reduce all tariffs on cars to zero within seven years.