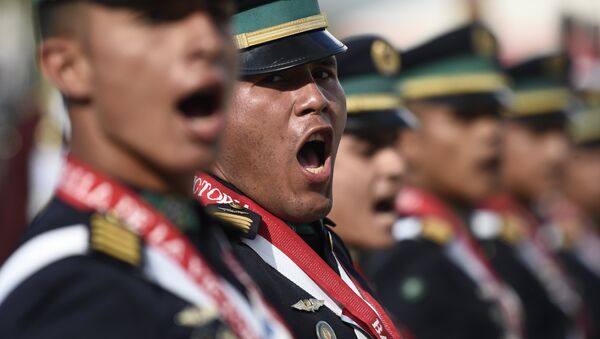 © AFP 2021 / Federico Parra
Subscribe
On Sunday, US President Donald Trump stated that the use of the US military in the Venezuelan crisis was among the possible variants.

US to Ease Sanctions on Venezuelan PDVSA If Guaido Assumes Control - Treasury
Addressing the issue of US sanctions against Venezuela's PDVSA oil company, he condemned them, calling the move "illegal compensation."

Maduro: 'No Aggressor Will Enter Venezuela,' Trump's Military Option 'Madness'
On January 23, Juan Guaido, the speaker of the Venezuelan opposition-led National Assembly, proclaimed himself the country's interim president. The opposition figure was supported by the United States and a number of other countries.

000000
Popular comments
It is difficult to see the point of threatening vacuous, empty gaseous nonsense. This will come back to haunt those threatening to 'have a military option on the table'. The cost will be so high that the players will wish they had never been born. How then is it that we do not hear real humility and vast amounts of compensation to those suffering in Venezuela - say a trillion US dollars to be paid over the next 30 days? If mere money can save skins then surely a mere trillion is a great deal or something like that.