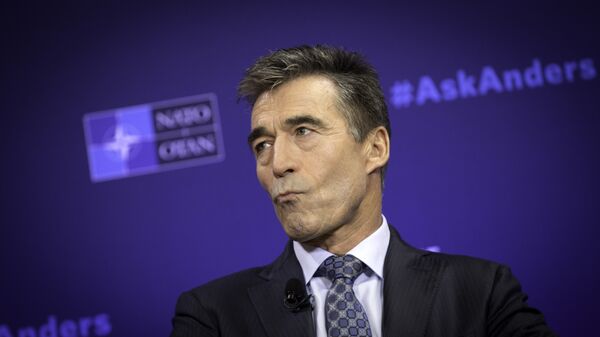 © AP Photo / Virginia Mayo
Subscribe
International
India
Africa
Prior to Copenhagen's controversial decision to enter the Iraq War, important data was withheld from the Danish parliament, a comprehensive report, which took several years to compile, has found. Furthermore, information about Iraq's alleged WMDs, which were never found despite various intelligence reports, was distorted.

Denmark's liberal-conservative government led by Anders Fogh Rasmussen, who later became NATO's secretary general, failed to pass on important information to the foreign policy committee ahead of Denmark's controversial US-led engagement in Iraq in 2003, a several hundred page-long report, compiled by researchers from the University of Copenhagen, has stated.

These wilful omissions gave parliament an "incomplete picture" of the situation, the report found. Denmark's contribution to military operations abroad generally reflects the decision-makers' desire to accommodate the US wishes, the historic report also stated.

Firstly, the Fogh government failed to inform parliament of the very purpose of invading Iraq. The government knew in advance that the US' goal war was to railroad a regime change and overthrow Saddam Hussein. By contrast, then-Prime Minister Anders Fogh Rasmussen and Foreign Minister Per Stig Møller repeatedly stressed that the alleged goal was to disarm Baghdad's apparent weapons of mass destruction (WMD) infrastructure, the researchers stressed.

"However, it appears from both embassy reports and other information such as internal notes that the US' goal was a regime change," the report said.

Secondly, the Danish government concealed prior reports that the war in Iraq would have serious consequences for the local population and sow chaos throughout the region. The Danish government received intel reports from the Defence Intelligence Service (FE), which predicted that the war would "destabilise the region, dissolve the Iraqi state, trigger terror and demand long-term involvement".

Thirdly, as associate professor Rasmus Mariager put it during the presentation of the report, the legal aspects were "adapted to political reality". While the Danish government assured there was sufficient legal basis for going to war, it was actually a political estimate, not a fact, researchers stressed.

Fourthly, the government failed to inform the foreign policy committee that Anders Fogh Rasmussen already had a personal meeting with then-US Deputy Defence Minister Paul Wolfowitz on 22 March 2002, a year before the invasion got underway. Back then, Fogh allegedly promised Denmark's support for the invasion in the making.

Lastly, the Danish government exaggerated the trustfulness of the information, passing assessments as secure knowledge. As Anders Fogh Rasmussen stated at a press conference on 20 March 2003: "Iraq has weapons of mass destruction. It's not something we just think. We know it".

The war investigation took two years to compile, and was led by associate professor Rasmus Mariager and professor Anders Wivel, both from the University of Copenhagen. In addition to Iraq, it also evaluated politician decisions on Kosovo (1998) and Afghanistan (2001), which resulted in the death of dozens Danish soldiers.

The researchers found that Denmark was quick to show solidarity with the US in the wake of the 9/11 terror attacks, despite the absence of pressure from Washington.

The report doesn't aim to apportion legal responsibility or point a finger. By contrast, the Iraq and Afghanistan Commission had this opportunity, but was closed down when Venstre returned to power in 2015.

According to Red-Green alliance foreign policy spokeswoman Eva Flyvholm, the findings of the investigation call for a inquiry, which may call in witnesses and place legal responsibility accordingly.

"It is now quite clear that the Fogh government withheld information about the Iraq war and that the truth was distorted for the parliament. It is a serious scandal that must be thoroughly investigated", Eva Flyvholm told the Jyllands-Posten newspaper.

Copenhagen University professor Ole Wæver called the Iraq war "one of the biggest blunders of modernity".

Denmark decided to join the war against Iraq on 21 March 2003, by the narrowest possible majority backed by Venstre, the Conservatives and the Danish People's Party. The same day, the US-led coalition started to bomb Iraq. The Danish ground contingent was deployed in Iraq between June 2003 and July 2007, peaking at about 550 men. Denmark's military involvement in Iraq was estimated to cost DKK 2.4 billion (circa $370 million at the current exchange rate). Eight Danish soldiers lost their lives during this period.

The US-led and Danish-backed invasion effectively toppled Hussein, displaced hundreds of thousands of people, plunged the nation into chaos and sectarian violence, and exacerbated ethnic and religious tensions in the region.