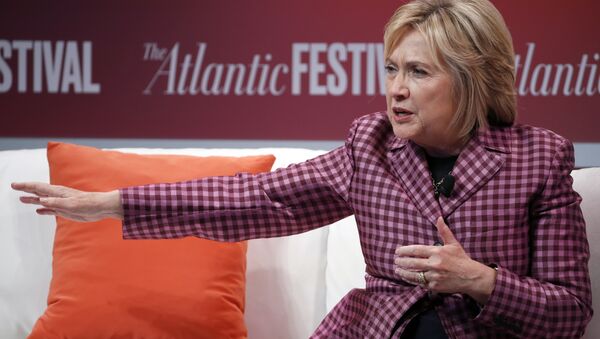 While the number of US politicians calling for Virginia's governor to resign over his “blackface-KKK” yearbook photo continues to rise, a photo of Senate Majority Leader Mitch McConnell posing in front of a Confederate flag emerged on social media.

Former US Democrat presidential hopeful Hillary Clinton recently joined the chorus of politicians calling Virginia Governor Ralph Northam, a Democrat himself, to resign over controversy sparked by the emergence of a 1984 photo from his yearbook that features two people, one wearing blackface while the other is clad in a KKK robe.

"This has gone on too long. There is nothing to debate. He must resign," Hillary tweeted in response to a media report about both Virginia’s senators urging Northam to resign.

This has gone on too long. There is nothing to debate. He must resign. https://t.co/TjfS3vbcws

​Her statement, however, evoked a mixed reaction on social media: while some seemed inclined to agree with Hillary, others focused their attention on controversy surrounding the 2016 presidential candidate.

This has gone on too long.
There is nothing to debate.
She must be prosecuted.

As soon as you "Cough up" dem Emails, He will resign. But you 1st.

​A number of people also recalled certain aspects of Hillary’s past, including her support of Northam’s election campaign and her relationship with Robert Byrd, a former high-ranking member of the Klan.

Let me remember Hillary called blacks predators went on stage and participated in a blacks are always late because they are lazy joke and recently said they all look alike and don’t forget senator bird the kkk grand wizard who Hillary called her mentor.

You are joking, right? How can you call out the Governor for posing as #Kkk when YOU were mentored and friends with #KuKluxKlan Leader #RobertByrd? How can you call out @POTUS for #RussianCollusion when u hired #Russian for dossier & managed to deliver 20% of US Uranium to USSR? pic.twitter.com/n5aFoSTdk7

https://t.co/xaXA5a80ki Let us remember that Northam was her buy-out!

​Hillary Clinton’s calls were also echoed by New York Rep. Alexandria Ocasio-Cortez, who tweeted that “Northam must resign, and those who try to help him stumble past this deserve scrutiny”.

Northam must resign, and those who try to help him stumble past this deserve scrutiny.

If you can’t understand how painful + eroding this is to American society, let alone the state of Virginia, take some time to read up this weekend.

To start, try “Between the World and Me.” https://t.co/Fm0srrPZgN

​But while Ocasio-Cortez urged people to try and understand “how painful + eroding this is to American society, let alone the state of Virginia”, there were those who apparently did not see eye to eye with her on this matter.

Nope. That’s 35 yrs ago. He can be a completely different man now.. Times where alot different them also. No one freaked out about that then. They jus didn’t…

It was 30 years ago. I don’t mind him resigning. But if we don’t allow people to evolve, then there is no point of people evolving.

This mob mentality of stoning anyone who made a mistake at any point in their life is not healthy. People need to be able to apologize and to have that apology accepted. Especially when the events were 25 years in the past and behavior has changed.

​Meanwhile, Republican Senate Majority Leader Mitch McConnell also ended up being thrust into the limelight amid the Northam scandal, after a photo of the former posing in front of a Confederate flag emerged online.

Tell it to McConnell, or is the Confed flag just a celebration of "southern heritage"? pic.twitter.com/3dI3jDn31B

​According to Time Magazine, the picture was taken sometime in the early 1990s at a Sons of Confederate Veterans event.

This development prompted social media users to debate whether McConnell should be pressured to resign as well.

So what’s the difference here between him and the Governor in question, party?

But him and his colleagues including @GOPLeader are crying for Northam to resign for his racist pic from 35 years ago? The hypocrisy in the Republican party is deep. They all should resign. Northam, McConnell, Steve King, Steve Scalise, Cindy Hyde Smith, every last one of them.

So maybe he should resign, then. Or is what Northam did 30+ years ago somehow different?