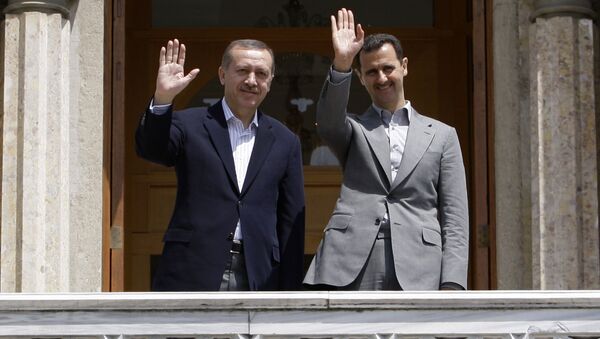 Ankara and Damascus broke off diplomatic relations in 2012 after the outbreak of the armed conflict in Syria. In December, Turkish Foreign Minister Mevlut Cavusoglu said that Ankara was only in contact with Damascus through third parties, such as Russia and Iran.

Turkish President Recep Tayyip Erdogan has stated that Ankara maintains relations with Syria through the two countries' intelligence agencies, which he said could maintain links even if their leaders did not.

"Foreign policy is being conducted with Syria at a low-level. Even if it's your enemy, you will not entirely break ties in case you might need them," he told state-run TRT television.

READ MORE: Syria Belongs to Syrians, Turkey to Give it Back to Its Owners ASAP — Erdogan

Erdogan has repeatedly ruled out any direct talks with Syrian counterpart Bashar Assad, with Turkish Foreign Minister Mevlut Cavusoglu saying in December that Ankara was only in contact with Damascus through third parties, including Russia and Iran.

Ankara and Damascus severed diplomatic ties in 2012 following the outbreak of armed conflict in Syria.

The Turkish government considers the Kurdish People's Protection Units (YPG) in Syria to be part of the Kurdistan Working Party (PKK), a group blacklisted as a terrorist organisation in Turkey.

In November 2017, the Turkish newspaper Hurriyet cited Erdogan as saying that he does not exclude the possibility of future contacts with Syrian President Bashar Assad to counter the YPG. Erdogan said at the time that "the doors of politics are always open until the last moment."

Earlier that year, Erdogan reportedly refuted reports claiming that he had a secret meeting with Assad, adding that "I haven't spoken with Assad and I don't intend to."

Erdogan: It Is Necessary to ‘Resist Separatist Efforts’ in Syria
Assad, for his part, said at the time that Damascus does not consider Ankara to be its partner or a guarantor state of the Syrian settlement, given that Turkey allegedly supports terrorism and thus undermines the peace process in Syria.

Turkish troops and Ankara-backed Free Syrian Army rebels have conducted two military campaigns in the Arab Republic over the past several years, justifying them by citing the need to secure its borders with Syria amid the threat posed by the Kurdish forces.

The Turkish military controls the northern Syrian cities of Afrin, Jarablus and Al-Bab, which Damascus has condemned as an unlawful incursion.