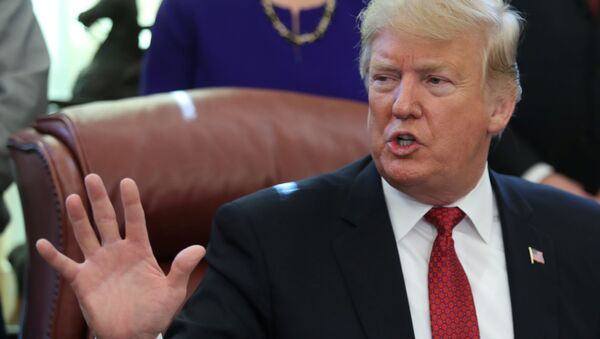 © REUTERS / Jonathan Ernst
Subscribe
International
India
Africa
Top intelligence officials this week challenged Donald Trump in their assessment of foreign threats to US security, warning about the looming resurgence of Daesh* and North Korea's unwillingness to completely commit to denuclearisation, as well as praising Iran for its compliance with the nuclear deal.

Donald Trump's intelligence briefers have trouble communicating their assessments to the US president, according to a report by Time magazine.

US intelligence officials, who spoke out on the condition of anonymity, revealed that they had been told to avoid giving Trump information that is at odds with his public statements.

Sources told the magazine that Trump usually reacts angrily when briefings contain information that conflict with his stances and beliefs.

In the most recent example, the president hit out at heads of major intelligence agencies over their threat assessment of North Korea and Iran.

Earlier this week, Director of National Intelligence Dan Coats told Congress that the Islamic Republic continues to comply with the 2015 nuclear deal and that it has effectively curbed its nuclear program. Donald Trump, who withdrew the US from the agreement last May, slammed the deal as "deeply flawed", insisting that it doesn't stop Iran from obtaining nuclear arms.

'It Blows My Mind': Madeleine Albright 'Stunned' by Trump Schooling US Intel

In another statement in contradiction to Trump's stance, Coats suggested that North Korea was "unlikely" to dismantle its nuclear arsenal. "Our assessment is bolstered by our observations of some activity that is inconsistent with full denuclearisation," he added.

Trump reportedly plans to hold a second meeting with Kim Jong-un in late February. Last year, they sat down at a landmark summit in Singapore where they committed to the "complete denuclearisation" of the Korean peninsula.

Coats also told Congress that Daesh is likely to regroup and that Washington has to continue to "keep an eye" on it. Moreover, he said Daesh "returned to its guerrilla warfare roots while continuing to plot attacks and direct its supporters worldwide" and is "intent on resurging and still commands thousands of fighters in Iraq and Syria".

READ MORE: ‘Sustained Attacks’ on Troops in Syria May Accelerate US Pullout — Activist

In December, Donald Trump famously claimed that the United States defeated Daesh in Syria and announced the pull-out of US troops from the war-thorn country, saying Turkey and Syria could finish them off on their own.

This announcement was followed by the resignation of Jim Mattis, who had served as US defence secretary since Trump was sworn into office. In his resignation letter, Mattis pointed to stark disagreements with Donald Trump over foreign policy, stirring speculation that the US withdrawal from Syria was the last straw that led to his departure from Pentagon.