‘Sustained Attacks’ on Troops in Syria May Accelerate US Pullout - Activist 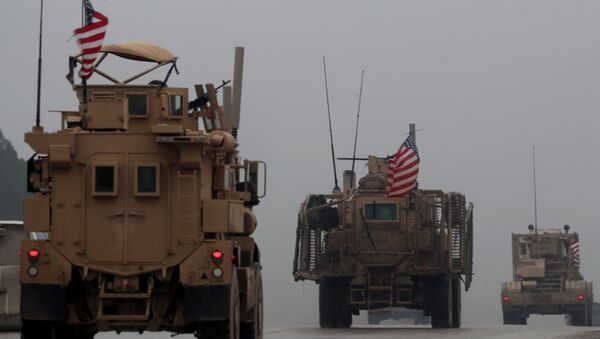 © AFP 2023 / Delil SOULEIMAN
Subscribe
International
India
Africa
According to a draft Pentagon report, Daesh* could regain its territory in just six months if no action is taken. The draft of the Department of Defence Inspector General’s Quarterly Report about Operation Inherent Resolve is expected to be released early next week.

In recent days, the US has increased its number troops in Syria to some 3,000 to help with the withdrawal, according to media reports.

Sputnik discussed the US pull-out from Syria with Maram Susli, a Syrian activist and political commentator.

READ MORE: Daesh Could Reclaim Syrian Areas Abandoned by US in a Year — Report

Sputnik: The Pentagon has spoken against the US pulling out of Syria and now with this report, what are your thoughts on the chances that the US will in fact pull out?

Maram Susli: [As for] the chances that the US will pull out, eventually they're most certainly going to have to pull out. It's not really up to them per se, because there're outside pressures that are going to eventuate in them pulling out. For example, Turkey is threatening to invade because they fear the Kurdish YPG is becoming too powerful; and of course the YPG has links to the PKK, which Turkey sees as a terrorist organisation. And the Kurdish troops that the US is backing are occupying areas that aren't majority-Kurdish; they're occupying Arab and Assyrian cities and tensions are increasing there. So, it's not possible for them to continue this indefinitely. And finally, the Syrian state, they are not going to leave things as they are either. Of course, Syria has been quiet; they've been waiting to see if they can have Turkey and the US cancel each other out. But they are not going to just leave things as they are with the US occupying the oil fields; they have their own plans. It might be the case that US troops will begin feeling sustained attacks that will eventuate in them having to pull out.

Sputnik: It seems that there're a lot of people in the US government that are on a different page than Donald Trump on this issue. It's interesting that you said that the US president can start a war without the Senate's permission; however, if he wants to end a war, the Senate will have to get involved. Can you elaborate a bit more on that?

World
US Senators Urge Trump to Protect Syrian Kurds From Turkey After Troop Pullout
Maram Susli: Absolutely. It's interesting because Trump is technically the commander-in-chief, he can start wars and end them without congressional or Senate approval; but the Senate doesn't have the power to actually stop Trump from withdrawing troops. This is really just a message to him that the Deep State isn't happy with the idea of an early pull-out from Syria. It really says something that in the US, the government or the senators that people are voting for only exercise their rights when it comes to trying to continue a war rather than stopping it.

Sputnik: Recent reports have pointed out that the US has sent an additional 200 troops to Syria to regulate the withdrawal process. They're actually adding troops to regulate withdrawal, which seems very strange.

Sputnik: What are your thoughts on when we can expect the US to actually withdraw, or do you think it's just not going to happen?

Maram Susli: I think the fact that they sent in 200 troops could be because withdrawing can be dangerous sometimes. There're only, supposedly, 2,000 to 5,000 troops in the country, so, perhaps, they just need that extra support to get them out safely. On the other hand, this could be like a message of defiance from the US military to Trump saying: "we're not obeying your orders"; or it could be that the US, Trump, the Senate, the Pentagon with its statements — perhaps they are playing a game of good cop, bad cop for the sake of Russia, Turkey and Iran, kind of pretending that "we're ready to pull out; but we're ready to negotiate [the] pull-out, but certain demands have to be met". Trump's statement of withdrawal might be an indication that they're ready to pull out, and then maybe not. So, it could be various things. There is a lot of resistance to the idea of a pull-out, especially from the Pentagon. I think, however, it's very clear that strategically, militarily it's going to be very difficult for them to maintain the occupation.

Maram Susli: For all intents and purposes, ISIS (Daesh) as a state has most certainly been defeated; there're certain villages that are still occupied, but there's no way that ISIS is going to go back to the way that it was, controlling vast areas, Raqqa, etc. The risk of terrorist attacks in the future is a risk that the entire world is facing, not just Syria. So, I think that statements that ISIS might return if the US leaves are all just attempts to create an excuse to maintain the occupation. And really, the situation for ISIS not to return would have to be for the Syrian state to control all these areas. Russia has done a far better job at fighting ISIS along with the Syrian Army than the US ever has; and I would hazard to guess that the US would try to preserve ISIS villages to maintain that excuse to remain in Syria.

Sputnik: Do you feel that Syrian government troops are capable of preserving the status quo in terms of security in the country, or do they need additional help from other countries that have been involved in the war?

Maram Susli: I think that Syria has shown that it's far more capable of dealing with not only ISIS, but Al-Qaeda throughout this war. Of course, they're going to need the help of their allies, Russia and Iran, at least until things are stabilized. But the last thing that Syria needs is the US occupation, which has been crushing to the Syrian economy, occupying not only oil fields, but much of the agricultural areas as well.