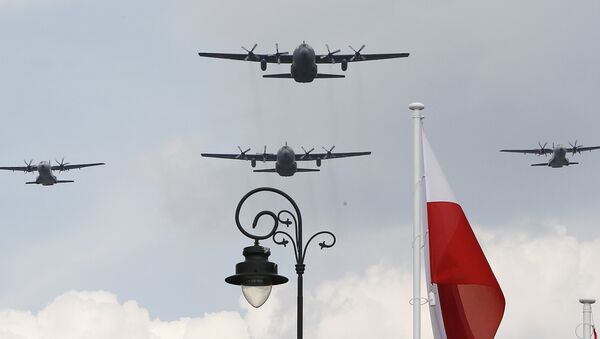 © AP Photo / Czarek Sokolowski
Subscribe
European countries have voiced their concerns over nuclear security after the United States announced its withdrawal from the INF Treaty, a major 1987 nuclear arms agreements with Russia. Poland, a NATO frontline nation, supports the US' withdrawal from the pact, while accusing Russia of what it calls aggressive behaviour.

Poland's Ministry of Foreign Affairs has denied a report suggesting that the country's top diplomat wants the United States to deploy its nuclear weapons in the country.

On Friday, Germany's Spiegel newspaper published a conversation with Polish Foreign Minister Jacek Czaputowicz, who was quoted as saying that it is in Warsaw's interest that "American troops and nuclear missiles are stationed on the continent" after the end of the Cold War-era nuclear arms treaty between Washington and Moscow.

In the article, titled "Poland's foreign minister calls for US nuclear missiles in Europe", Czaputowicz noted that Poland does not want US nukes in its territory "at all", but their deployment will depend on whether Russia would continue with what he called its "aggressive arms policy".

The foreign ministry said that the headline was misleading and "did not convey the content of the conversation". According to the statement, Czaputowicz left "possible decisions regarding the place of stationing this type of weapon… to the sole discretion of NATO".

In a separate statement, the ministry expressed its support for Washington's recent decision to suspend its obligations under the INF Treaty.

On Friday, Donald Trump announced that the US would pull out of the 1987 agreement within six months, citing what he called long-time violations of the treaty by Russia. He pledged to develop "our own military response options", noting, however, that he wants to strike a "much better" deal with Moscow.

Russia, which has repeatedly dismissed Trump's accusations as ungrounded, suspended the nuclear treaty in retaliation on Saturday, with Vladimir Putin saying that he was still open to negotiations.

The INF Treaty was signed by the Soviet Union and the US in 1987, and provides for the elimination of all nuclear-armed ground-launched ballistic and cruise missiles, along with their launchers, that operate at ranges between 500-1,000 kilometres (short range) and 1,000-5,500 kilometres (intermediate range).

Washington claims that Moscow has been fly-testing 9M729 (NATO classification SSC-8) missiles at ranges prohibited by the accord, but Moscow insists its missile tests comply with the treaty.

Russia, in turn, has accused the US of deploying missile defence systems in Romania and Poland in violation of the pact, while also saying that armed US drones qualify as ground-launched missiles and thus should be banned.