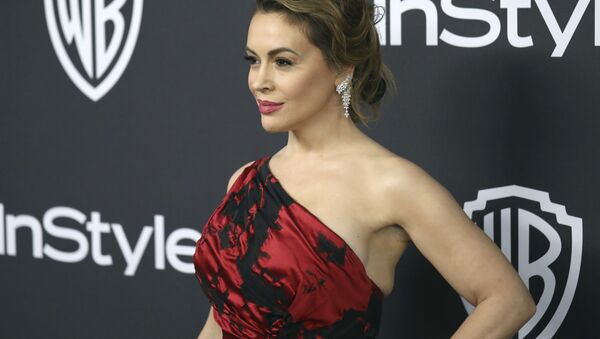 © AP Photo / Matt Sayles/Invision
Subscribe
International
India
Africa
Milano’s criticism came as her target, Jennifer Rubin, claimed that Virginia Governor Ralph Northam needs to step down over his controversial yearbook photo and be replaced by a Lieutenant Governor Justin Fairfax, whom she described as a ”dynamic, eloquent African American”.

Earlier, Northram ended up facing a barrage of criticism and was called to resign after a picture from his 1984 medical school yearbook emerged, featuring two persons – one of them wearing blackface, the other clad in a KKK robe. One of the two students is allegedly Northram himself.

The governor, however, has disputed these allegations, although earlier he acknowledged that he was in the photo.

Echoing the resignation calls, Rubin noted that "Lt. Gov is dynamic, eloquent African American", and it was her choice of words that attracted Milano’s ire.

This right here is what systemic deep-rooted racism looks like. Recognize it and call it out when you see it. 👇 https://t.co/3KXTy4dUg2

You cant even parody this.

This right here is what systematic deep-rooted self promoting selective outrage and virtue signalling looks like. Recognize it and call it out when you see it.

It's just Alyssa trying to create issues where none exist.

"I mean, you've got the first sort of mainstream African-American who is articulate and bright and clean and a nice-looking guy. I mean, that's a story-book, man," Biden said.

Others, however, appeared to agree with Milano’s reasoning.

The point is that they didn’t need to use the word eloquent especially preceding African American suggesting that it’s a unique thing. If it were the norm, it would not require a qualifying adjective. You wouldn’t see ‘eloquent white man’ used like this.

“Noble savage” trope. As a Muslim I get this a lot too, said about me, said to me by colleagues about other Muslims. It doesn’t stop.