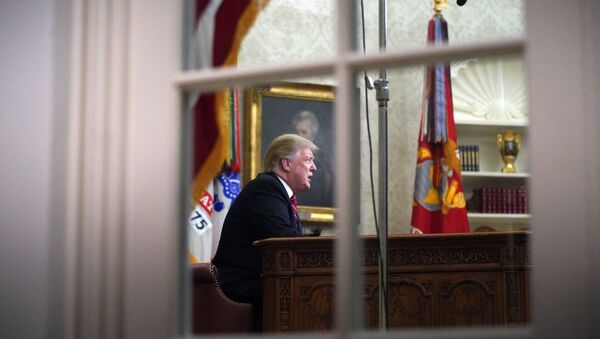 Sputnik: The US has announced its decision on the INF Treaty. What impact is this having on the global arena, and what do you think the chances are that in this six month period there will be some possibility of the US returning to that treaty?

Harvey Wasserman: Well it depends if Donald Trump is still president. We have a lot going on here in terms of internal investigations of his criminal activities, and his tax returns are about to become public, we think. So there's a lot of turmoil, and this is basically a distraction put forward by the Trump administration, which is always glad to have more weapons and more turmoil going on. There's no rational reason for doing this. The Trump administration's justifications make no sense, and we'll just have to see how things unfold domestically. This is basically an act of theatre on the part of the administration to distract from other internal problems.

Russian MoD Shows PHOTO of US Plant Set to Produce Missiles Banned Under INF
Sputnik: How much press is this getting in the US? Are people concerned about this? Is this one of the top news stories that you're hearing?

Harvey Wasserman: Oh yeah, it's all over. But you know, you have to understand that the United States has been assaulted with more than two years of irrational insanity here, and this is another dance step. Donald Trump has hundreds or more children locked up on the Mexican border. He's shut down the government. Every day there's a new major uproar, and this is just another one of them. And of course the stakes are very high, but basically we have a madman in the White House, and this is just another piece of his dance routine.

Sputnik: Is there any way that the US could benefit from withdrawing from this treaty? Maybe Donald Trump is planning to put some intermediate-range missiles on Guam or something? What do you think will be done if the US is no longer bound to this treaty?

Harvey Wasserman: It depends what he wakes up one morning and thinks he wants to do. I guarantee you that there's no larger plan afoot here. He may want to sell more missiles; he may have some friends in the arms industry who will benefit from this by making more weapons. Just as he may benefit from the fees that are paid to the prison owners who are locking up the children on the Mexican border. You cannot ascribe any rational thought to this latest nonsense.

The missile treaty is extremely important to the survival of the human race. It has held. There is no rational reason to pull it aside. The problem is we don't have a rational human being in the White House.

Sputnik: This treaty was designed to keep both sides from placing intermediate, midrange weapons on European territory, and now the EU is rightly concerned with not wanting to become a region of superpower rivalry where you've got Russia trying to place something to counter what the US might place in various parts of Europe. How do you see the Europeans' situation post-withdrawal by the US from the INF?

Harvey Wasserman: I'm sure they're completely freaked out. I mean this is a game of Russian roulette being played by a human being in the Oval Office that has no idea what he's doing, and doesn't really care. We have no idea what the dynamic here is between Putin and Trump, except that we know that Putin is far more intelligent than Trump and does have a rational view of the world.

World
From 'Bad News' to 'Full Support': How World Powers Reacted to INF's Collapse
But this can be based on something [to the effect that] Trump woke up and someone whispered in his ear, like John Bolton, and he just decided to do it. He has no comprehension of foreign policy. He has no comprehension of nuclear realities. This is just another foray into a constant stream of craziness that we've been living with for more than two years, and will continue until Trump is removed from office. We don't know when that will happen, but you're going to see in the United States now a series of hearings that are going to be absolutely shocking, because Mr. Trump has been money laundering for the last thirty years. And this is just another diversion, frankly, not well-thought, really on the spur of the moment, by someone who doesn't know what he's doing.

Harvey Wasserman is a journalist, commentator and anti-nuclear activist. He is the co-founder of the No Nukes movement and author of Solartopia! Our Green-Powered Earth AD 2030. The views expressed by Mr. Wasserman are his own, and do not necessarily reflect those of Sputnik.