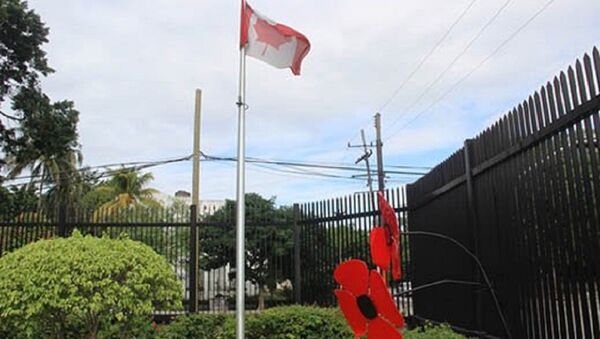 MOSCOW (Sputnik) - Cuba's Foreign Minister Bruno Rodriguez called Canada's decision to reduce the number of diplomats working in the island nation, due to alleged health conditions experienced by the staff, "disappointing and incomprehensible," suggesting no evidence had been provided about the alleged sickness suffered by the Canadian nationals.

"Cuba is a safe country where 115 embassies and 6 international agencies offices are accredited. Canada's decision to downscale diplomatic staff in #Havana is both disappointing and incomprehensible. There isn't the slightest evidence about the alleged health injuries," Rodriguez wrote on Twitter on Friday.

READ MORE: US to Boost Pressure on Venezuela, Cuba to Curb Russia, China in Region — Report

Canada Reduces Diplomatic Mission by Half in Cuba, 14th Staffer Falls Oddly Ill
Global Affairs Canada said on Wednesday that Ottawa had decided to reduce the number of its diplomatic staff in Havana by half after another person became ill since the last confirmed case in November.

According to Ottawa, the case brought the total number of affected Canadian employees, spouses and dependants in Cuba to 14. The Canadian government continued to investigate the potential causes of the unusual health symptoms these individuals have experienced; however, so far there had been no cause identified, the foreign office said.

Notably, in 2017, the US authorities said that some of the diplomats working at the US embassy in Cuba had been affected by an audio device and showed strange symptoms similar to the ones displayed by the Canadian embassy staff.