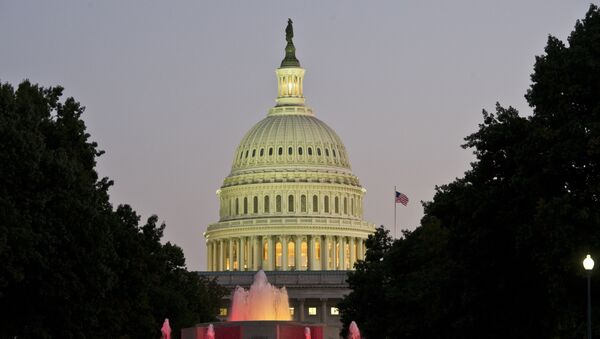 "[T]he administration should pursue serious diplomacy to save it, rather than rushing ahead with a plan to terminate the agreement, undermining international institutions and alienating our allies," House of Representatives Foreign Relations Committee Chairman Eliot Engel said.

By pulling out of the treaty, President Donald Trump is creating an opening for a dangerous arms race, Engel warned.

Senator Dianne Feinstein agreed with Engel that the Trump administration should use diplomatic tools to respond to and engage Russia on treaty issues rather than pull out of the agreement entirely.

"There’s no question that Russia is violating the treaty and that we need to address those violations. But we should do so by taking coordinated diplomatic action with our NATO allies," Feinstein said in a statement.

EU Security Cannot Be Entrusted to US After INF Suspension - German Lawmaker
By withdrawing from the INF treaty, the United States was saying in essence that Russia was free to deploy its weapons, Feinstein said.

Earlier on Friday, Secretary of State Mike Pompeo announced that the United States would suspend its obligations under the INF treaty on Saturday and would begin a six-month withdrawal process unless Russia "returned to compliance".

Washington has repeatedly claimed that a Russian missile test in 2014 violated the agreement while Moscow has complained that US launchers on defense systems in Europe are capable of firing cruise missiles at banned ranges.

Trump Hopes to Negotiate 'Much Better' Deal Than INF Suspended by US
Russian Foreign Ministry spokeswoman Maria Zakharova on Friday said that the United States has so far failed to present any evidence to support allegations that Moscow has violated the INF treaty.

000000
Popular comments
An arms race it not just dangerous, it is incredibly expensive (for the nations and their tax payers) -- which is the objective here of the military industrial complex, a financial injection for the arms industry and good financial skimming for (((certain institutions))).
pepa
2 February 2019, 02:12 GMT
000000
And again with the alleged violation and no actual proof, stating that "Russian missile test in 2014 violated the agreement" isn't enough to declare Russia guilty of anything. And don't forget the US AEGIS in EU that can launch intermediate missiles, no more double standards.
Shadowlady8
2 February 2019, 05:57 GMT
000000
Newsfeed
0
New firstOld first
loader
LIVE
Заголовок открываемого материала
Access to the chat has been blocked for violating the rules . You will be able to participate again through:∞. If you do not agree with the blocking, please use the feedback form
The discussion is closed. You can participate in the discussion within 24 hours after the publication of the article.
To participate in the discussion
log in or register
loader
Chats
Заголовок открываемого материала
Worldwide
InternationalEnglishEnglishMundoEspañolSpanish
Europe
DeutschlandDeutschGermanFranceFrançaisFrenchΕλλάδαΕλληνικάGreekItaliaItalianoItalianČeská republikaČeštinaCzechPolskaPolskiPolishСрбиjаСрпскиSerbianLatvijaLatviešuLatvianLietuvaLietuviųLithuanianMoldovaMoldoveneascăMoldavianБеларусьБеларускiBelarusian
Transcaucasia
ԱրմենիաՀայերենArmenianАҧсныАҧсышәалаAbkhazХуссар ИрыстонИронауОssetianსაქართველოქართულიGeorgianAzərbaycanАzərbaycancaAzerbaijani
Middle East
Sputnik عربيArabicArabicTürkiyeTürkçeTurkishSputnik ایرانPersianPersianSputnik افغانستانDariDari
Central Asia
ҚазақстанҚазақ тіліKazakhКыргызстанКыргызчаKyrgyzOʻzbekistonЎзбекчаUzbekТоҷикистонТоҷикӣTajik
East & Southeast Asia
Việt NamTiếng ViệtVietnamese日本日本語Japanese俄罗斯卫星通讯社中文（简体）Chinese (simplified)俄罗斯卫星通讯社中文（繁体）Chinese (traditional)
South America
BrasilPortuguêsPortuguese
NewsfeedBreaking
06:18 GMTDanish PM Facing 'Minkgate' Probe Over COVID-19 Blanket Cull of Farmed Animals
06:10 GMTThe Bennett-Lapid Government's First 100 Days: What Promises Have They Broken?
05:52 GMTPowerful Earthquake in Australia Damages at Least 46 Buildings
05:42 GMTUK Reportedly Mulls Joining US-Mexico-Canada Trade Deal as FTA With America Stalls
05:24 GMTBrazilian Health Minister, Who Arrived at UN, Says Contracted COVID-19
04:30 GMTA Sigh That Tells It All: Golden Retriever Wants Attention
04:28 GMTLive Updates: Germany Registers 10,454 New COVID-19 Cases
04:11 GMTFlorida Gov. Orders All State Agencies to Search for Laundrie After Petito's Remains Confirmed
03:43 GMT'Nothing New on That': Bill Gates Brushes Off Question About His ‘Dinners’ With Epstein
03:33 GMTGOP Politicians Stand by US Border Patrol After Claims They 'Whipped' Refugees at Rio Grande River
03:14 GMTPele Cheers Up Fans by Posting Video of Him Riding Exercycle in Hospital
03:07 GMTAxis of Resistance Killed US, Israeli Commanders in Revenge for Soleimani's Assassination - Report
02:56 GMTPolitical Capital & GOP in His ’Grip’: Trump ’Wants Back’ in 2024, Journos Say
01:43 GMTIRGC Chief: Iran No Longer Sees US as Threat - Report
01:18 GMTChinese Covid Vaccines Reach 100 Nations, But WHO Warns Africa Still Short 470 Million Shots in 2021
01:04 GMTAwkward Moment as White House Staff Cuts Off Biden-Johnson Meeting in Mid-Sentence
00:20 GMTVideo: Military Jet Intercepts Small Aircraft Over NYC in the Middle of UN General Assembly
00:19 GMTPark Ranger ‘Implored’ Gabby Petito to Distance Herself From Toxic Relationship With Brian Laundrie
YesterdayVideos: 6.0 Earthquake Strikes Southeastern Australia
YesterdayPro-Reunification Candidate Chang Ya-chung Edges Ahead as Chairman Election in Taiwan’s KMT Nears