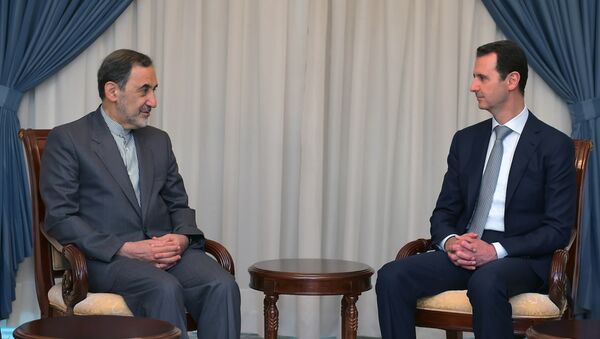 © AP Photo / SANA
Subscribe
MOSCOW (Sputnik) - The issue of Iran's full disengagement from Syria should be discussed exclusively between Tehran and Damascus, Russian Ambassador to Tehran Levan Dzhagaryan told Sputnik in an interview.

"The issue [of Iran's withdrawal] is the prerogative of the Syrian authorities. If it is raised, it will be discussed only between Damascus and Tehran, since Iran’s military presence in Syria is legitimate, Iranian advisers are there at the invitation of the legitimate Syrian government", the ambassador said.

While Trump is in Power, Iran Will Not Have Any Relations With US - Journalist
The statement comes in the wake of US President Donald Trump's announcement regarding his intention to pull troops out of Syria since, according to him, the terrorist groups there had been defeated.

Russia, Turkey and Iran are the guarantors of the ceasefire regime in Syria, while Moscow has also been supporting the government forces' fight against terrorist groups and providing humanitarian aid to civilians.

Tehran Did Not Address Moscow Over S-400 Purchase

Dzhagaryan went on saying that Tehran did not contact Moscow in order to buy Russian S-400 air defence complexes.

"As far as I know, Iranian partners did not address us with such a request", the ambassador noted, adding that Moscow was committed to export control obligations in relation to Tehran.

Levan Dzhagaryan stated that Russian oil companies have not lost interest in the Iranian market under renewed US sanctions.

"It is clear that Russian oil companies have certain concerns related to the renewal of the sanctions regime, but I would not say that they have lost interest in the Iranian market. It is still early to draw any final conclusions", the envoy said.

READ MORE: What You Should Know About the Newly Registered Mechanism for EU-Iran Trade

EU Special Mechanism Not to Impact US Maximum Pressure on Iran - State Dept.
The United States reinstated sanctions against Iran following the country's withdrawal from the Joint Comprehensive Plan of Action (JCPOA) — the Iran nuclear agreement — in May. The first round of sanctions came into force in August, followed by a second round on November 5. The sanctions target not only Iran's economy but also those individuals and entities who continue to do business with Iran.

The ambassador has also mentioned that Moscow believes that Iran has the right to develop its own space program and is confident of its peaceful nature.

"We believe that Iran has the right to develop its space program, because, we are convicted, it is of an exclusively peaceful nature. The missile tests conducted in Iran do not contradict UN Security Council Resolution 2231 either", the diplomat said.

Russian Ambassador to Tehran Levan Dzhagaryan has also touched upon the situation in Idlib and Turkey's potential offensive that are likely to become one of the central topics on the agenda of the upcoming Astana format summit on Syria.

"I believe that the issue [of Turkey's possible offensive on Idlib] will be discussed among other issues, like it was addressed on 7 September 2018 during the previous meeting in this format in Tehran", the ambassador said.

Russian President Vladimir Putin and his Iranian counterpart Hassan Rouhani may hold a bilateral meeting to discuss the implementation of joint economic projects on the sidelines of the upcoming Russia-Iran-Turkey summit on Syria, Russian Ambassador to Tehran Levan Dzhagaryan told Sputnik.

"As a rule, the leaders of the two states take the opportunity to personally discuss current issues of bilateral cooperation on the sidelines of such events. The focus is likely to be on implementing existing joint projects in trade and economic sphere", the diplomat stressed.

The summit is scheduled for February 14, according to the Turkish Foreign Ministry.