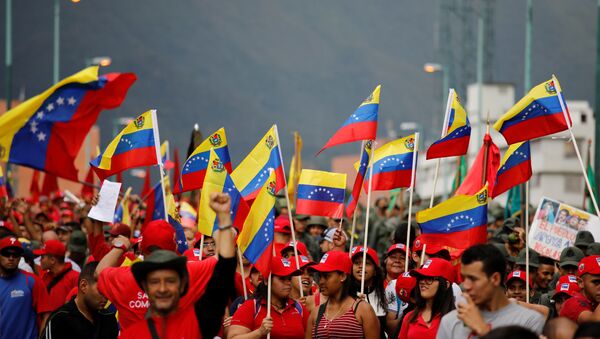 MOSCOW (Sputnik) - The EU should distance itself from the crisis in Venezuela and first see how the situation there develops in order to avoid the same hasty decisions and mistakes made during the Arab Spring uprisings in the Middle East and the Euromaidan events in Ukraine, Marco Zanni, a member of the European Parliament from Italy, told Sputnik.

"I think we should wait for the evolution of the current situation in order to better understand all the consequences and the different actors involved. We should learn from the recent similar situations, such as the so-called Arab Spring and Maidan, in which the EU and the international community had made some mistakes in their judgments", Zanni argued.

The lawmaker added that he believed the adopted resolution could not be considered as an act of interference in Venezuela's internal affairs since it was a non-binding document — EU member states would decide at a national level on whether to recognize Guaido as interim leader.

"Some EU member states have already recognised Guaido as country's legitimate acting president, some others are more careful and are still reflecting", Zanni indicated.

According to the EU lawmaker, the only problem regarding the Venezuelan crisis that could not be delayed was the suffering of Venezuela's people.

"The current situation could not remain the same for a long time; we should be sure that an eventual presidential election could help the country to find recovery in the best peaceful and democratic way, without any impositions and in the respect of people's will," the lawmaker emphasized.

The EU countries also decided to set up an international contact group to prepare conditions for a new election in Venezuela and pledged to examine in the near future the possibility of introducing new individual sanctions against Venezuelan officials.

Earlier in the week, Maduro told Sputnik in an interview that Caracas did not accept any ultimatums and emphasised, commenting on the EU demand to call a new presidential election, that Venezuela did hold a legitimate presidential election last year, in which 68 percent of Venezuelans voted to re-elect him. Maduro also suggested that "imperialists" should wait for 2025 for the next presidential vote.

Venezuela has been recently going through a political crisis, which further escalated after Guaido declared himself interim president on January 23. Maduro has repeatedly blamed Washington for being behind the attempted state coup in Venezuela since the United States and its several allies immediately recognised Guaido as legitimate interim president.

Mexico, Russia, Turkey and Uruguay were among the countries that have voiced their support for Maduro.

Views and opinions, expressed in the article are those of Marco Zanni and do not necessarily reflect those of Sputnik